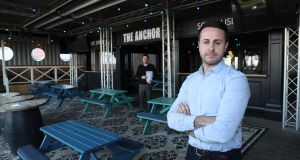 Pictured in Bray, Co Wicklow are Stephen Kavanagh (left), manager of The Anchor, and Shane O’Farrell (right), owner of several pubs in the area, including The Anchor, The Ardmore, Max & Harvey’s, The Wild Goose and Butler & Barry’s. Photograph Nick Bradshaw/The Irish Times

Many people breathed a sigh of relief on Monday night when Taoiseach Micheál Martin announced that the country was moving to Level 3 instead of Level 5 of the Living with Covid roadmap.

For publican and restaurateur Shane O’ Farrell in Bray, Co Wicklow, however, the decision still meant he had to close his businesses as restrictions on indoor dining meant it was not financially viable to remain open.

“Effectively what they’ve done is, they’ve said we’re on Level 3 but what they’ve really done is they’ve put our industry into Level 4 or Level 5. It would have been fairer if they had just said ‘close the premises’ because 15 people outside, particularly in our premises, they’re just not viable,” Mr O’Farrell said.

“We looked at different options of can we make 15 people work, can we try and protect jobs and save jobs, but when you actually sit down and do the numbers on it, it’s just not there. It would be only there if you were charging, like, €50 for a pint or €50 for a bowl of soup or something. It doesn’t pay to turn the lights on.”

Mr O’Farrell, who owns five different bars and restaurants in the area, said he had had no choice but to once again temporarily lay off his 115 full- and part-time staff members. He said he had tried the takeaway options during the summer but that it didn’t prove profitable.

“There was a small bit of interest in takeaways at that time and we tried them in a few of the premises and if we even broke even that was the height of it. There was no profitability whatsoever,” he said.

“The economic times now are completely different compared to back in the summer. The pandemic unemployment payment was a lot more, the banks and the lending institutions were more lenient in relation to moratoriums and breaks on loans and the people that would have maybe budgeted for summer holidays had that little bit of additional income.”

Mr O’Farrell said “public health is the most important thing” but expressed disappointment at the way which the information was conveyed.

“I think the way it has been communicated has been very difficult to take. I’m angry for our staff, that we have had to have that conversation, like we’re back in March again.

“It’s like you were kicked, you got back up, but now we’re kicked down again. It’s disheartening. You start to question whether you have the fight or the will, or the financial capability to get back up again.”

Mr Farrell added that there was “always that fear” that the temporary closure would become permanent.

“The longer it goes on, the bigger the fear is. We’re hoping things will improve and we will be able to reopen.”