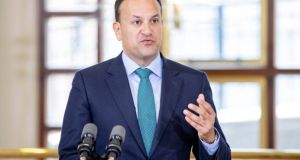 Tánaiste Leo Varadkar has warned that a short lockdown may still happen despite the Government rejecting this week the advice of the National Public Health Emergency Team (Nphet) to move to Level 5.

Sources present a meeting of the Fine Gael parliamentary party on Tuesday night said that Mr Varadkar warned that a circuit-breaker lockdown may be on the horizon.

“He basically said that a circuit breaker lockdown might, or might not work, but left us under no illusions that it is on the horizon,” said one source.

The meeting also heard calls for the reform of how the Nphet reports and operates.

Former Minister for Housing Eoghan Murphy said the team should report to the National Emergency Coordination Group, which is usually reserved for extreme weather events.

“He said that if you had all the departments and Nphet working together, around the same table, there would a more coherent response. The idea went down well overall, a lot of other TDs felt it was worth examining,” the Fine Gael TD added.

It is understood that Mr Varadkar also said there had been a “breakdown” in communication over the weekend between the Government and Nphet.

“The chain of command broke down, but he did not elaborate on why,” one TD present said.

A further 432 confirmed cases of Covid-19 were reported by Nphet on Tuesday evening.

This brings to 38,973 the total number of cases of the disease in the Republic.

One further death was reported by Nphet, leaving the total number of deaths at 1,811.

The latest figures come just hours ahead of the introduction of Level 3 restrictions across the State under the Government’s phased plan for tackling the spread of Covid-19.

In a statement, chief medical officer Dr Tony Holohan said: “It is essential that there is a broad societal effort over the coming weeks. Every one of us has the power to interrupt the spread of this virus and now is a vital time to use it.

“Focus on what you can do; wash your hands regularly, wear a face covering, keep your distance from others, avoid crowds, limit your social network, know the symptoms and what to do if you experience them or are a close contact of a confirmed case.”

The statement was Dr Holohan’s first public comment since he and other members of Nphet were publicly criticised by Mr Varadkar over the manner in which they had recommended the State move to Level 5 to curb the spread of the coronavirus. Their advice was rejected by the Cabinet on Monday.

Of the latest cases, 62 per cent are under 45 years of age and 48 per cent are confirmed to be associated with outbreaks or are close contacts of a confirmed case.

Earlier, Minister for Justice Helen McEntee confirmed there would be no additional powers for gardaí to enforce Level 3 restrictions which will be introduced countrywide from midnight for three weeks.

Ms McEntee said gardaí still had the power to prosecute organisers of indoor or outdoor gatherings in excess of the limits. These state no more than six people from one other household or no more than 25 people at a wedding.

Her comments come after Mr Varadkar appeared to suggest on Monday night that gardaí would be given enforcement powers.

Mr Varadkar told RTÉ’s Claire Byrne Live on Monday night that moving all 26 counties to Level 3 would be backed by greater enforcement than that in place for Dublin and Donegal, which were already on Level 3.

“A lot of this is going to be in law including staying in your county except for work or education or to care for somebody,” he said.

When asked if gardaí would police that provision, Mr Varadkar replied “the guards will be out”, adding that Ms McEntee had on Monday been granted additional money by Government to cover Garda overtime.

“We will update the laws, potentially to bring in a different system of fines and so on,” he added. But he failed to offer any more detail on specifics of the increased enforcement.

Ms McEntee confirmed on Tuesday that no new powers were being prepared for the latest phase of public health measures.

Asked about the matter on Tuesday, Garda Commissioner Drew Harris said additional powers were not required at this stage and nor had they been requested.

Mr Harris said a total of 132 fixed, or permanent, checkpoints would be placed daily on motorways and other arterial routes nationwide, from Wednesday morning under an expanded Operation Fanacht.

“They are to make sure people stay in their county and only travel whenever it is absolutely necessary… or their journeys would be very difficult,” Mr Harris said.

“We will have a very visible presence mobilised and we’ll carry that on in the weeks.”

On the problem of house parties, Mr Harris said they were not new to the pandemic and while gardaí could not enter a private residence without a warrant – the arrival of gardaí was often effective in dispersing crowds.

In Northern Ireland, a further 669 cases of coronavirus have been confirmed, taking the total in the North to 15,359.

One more death from Covid-19 was recorded, bringing the total to 585 since the beginning of the pandemic, the North’s department of health said.

In the past seven days there were 4,005 virus cases in the North. Over that period there were 962 cases in the Belfast City Council area and 876 cases in Derry and Strabane where more stringent Covid-19 conditions apply.

Currently, there are 67 patients being treated for the virus in Northern Ireland hospitals, with 13 of them in intensive care units and eight on ventilators.

The tone of Mr Varadkar’s comments on Monday night were criticised by Opposition parties in the Dáil.

Sinn Féin leader Mary Lou McDonald said she was very alarmed by the Tánaiste’s “aggressive approach”, while she acknowledged the call to raise the country’s restrictions to Level 5 had come “out of the blue”.

Ms McDonald said governments had asked for advice and when given it “I think you accept it with some level of maturity and grace and then you make your decision”.