Chief Justice emphasises ‘the urgency of bringing this process forward’ 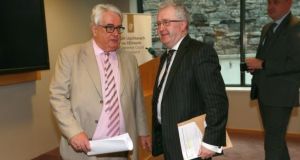 Recently appointed Supreme Court judge, Mr Justice Séamus Woulfe, has sought a postponement on medical grounds of a key meeting to deal with the outcome of the Golfgate inquiry with the Chief Justice, Mr Frank Clarke.

A meeting between the two had been due to take place on Monday, but was postponed until Friday by Mr Justice Clarke, following a request for a delay by Mr Justice Woulfe.

The Chief Justice had agreed a delay until Tuesday of next week, the spokesman said.

“The Chief Justice has emphasised to Mr Justice Woulfe the urgency of bringing this process forward.”

The informal resolution process included a meeting between Mr Justice Woulfe and three of his judicial peers, which took place on Friday, as reported by The Irish Times on Saturday.

However, the Friday meeting did not go well, with Mr Woulfe said to have been very surprised by the negative views that they had expressed, according to sources.

Throughout, members of the Supreme Court have refused to comment, though many continue to be furious with Mr Justice Woulfe for the negative publicity he has brought upon the court.

It is understood that the former attorney general has faced calls to make some form of public apology, or to face “a dressing down” from the Chief Justice.

It is not clear that this can happen without his consent, however. But if an agreed resolution cannot be found, then, according to one source, the collegiate Supreme Court faces “a very difficult situation”.

Mr Justice Woulfe, who was appointed to the State’s highest court in July, had been listed to begin his Supreme Court career on Tuesday, but this was changed, and he is currently not listed to hear any cases.

In her report, Ms Justice Denham said the former attorney general had not been “sufficiently vigilant” about his position as a newly appointed judge when he accepted the invitation to the Oireachtas Golf Society dinner.

However, she went further than some had expected by expressly stating that she believed it would be “unjust and disproportionate” if Mr Justice Woulfe was to face a resignation call now.

His attendance at the Clifden gathering “did nothing involving impropriety such as would justify calls for his resignation”, she said, adding that it was open to the Chief Justice to deal with the issue “by way of informal resolution”.

Ms Justice Denham was asked to compile her report in the absence of a complaints procedure for judges. The Judicial Council’s Conduct Committee was set up in July, but, so far, has engaged only in preliminary preparatory work.

Ms Justice Denham said she assumed her report was “in place of any potential action before the Judicial Conduct Committee” and that it would not be “ fair, or in accordance with due process, for any further action to be taken”.

Mr Justice Woulfe had good grounds for accepting assurances that the Clifden dinner did obey the Covid-19 rules, she said, adding that evidence had been produced to show that that was so.