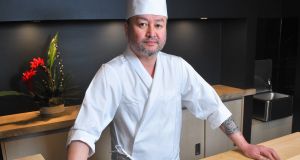 “You’re a legend, boy !” That’s how Michelin award-winning chef Takashi Miyazaki was greeted by one of the stallholders in Cork’s English Market when he rang in to order his supply of fresh produce to serve up at his Japanese restaurant, Ichigo Ichie.

Takashi’s Michelin star award, announced on Monday, is all the more remarkable as it comes just five months after he opened Ichigo Ichie at the former Fenn’s Quay restaurant on Sheares Street in Cork where he and his team of chefs have come up with a form of Japanese cuisine that is proving a hit with locals and visitors alike.

Behind the success is a fascinating story which Miyazaki relates in fluent English that rises and falls with the cadences of his adopted city, where he and his Irish-born wife, primary teacher Stephanie, are happily rearing their two young sons, Seán (three years and 11 months ) and Stephen (18 months).

A native of Fukuoka on the island of Kyushu, Miyazaki was interested in painting when he was growing up, but his parents were opposed to him going to art school and he instead went to university on a sports scholarship, thanks to his prowess at kendo, traditional Japanese fencing.

He got a part-time job in a restaurant at the airport in Fukuoka while at university and it whetted his appetite for cooking. He managed to get a job cooking fusion teppanyaki at a local five-star hotel where guests included rock stars such as Sting and Rod Stewart.

Eager to learn about the various regional cuisines within Japan, Miyazaki moved to Hiroshima where, with a love of Irish music and in particular U2, he found himself working in Molly Malone’s Irish Bar serving up bangers and mash and cottage pie.

“I had never eaten that kind of food, but it was while I was head chef at Molly Malone’s that I met Stephanie – she was teaching English in Hiroshima. Stephanie is from Offaly and we came over here on holidays a few times before I started to think I wanted to move to Ireland. ”

When I came to Ireland first, the sushi here was shocking, and there is so much more to Japanese food than sushi

Moving here in 2008, Miyazaki began working in a hotel before they started travelling around looking for a place to start his own restaurant. After trips to Belfast, Clare and Galway, they came to Cork and the fit seemed right. So began his mission to introduce Japanese food to Cork and Ireland.

“I really wanted to make what Japanese people eat every day, but when I came to Ireland first, the sushi here was shocking, and there is so much more to Japanese food than sushi. But they thought they were eating true Japanese food, so I said I have to change that – and this has become my mission.”

Miyazaki began by taking over reputedly Cork’s oldest Chinese takeaway, the Yangtze River on Evergreen Street, and in March 2015 he opened a Japanese takeaway, and the venture quickly proved a huge success, with long queues becoming a familiar sight.

Visitors started coming from as far away as Dublin and Galway for takeaway meals as Miyazaki’s reputation spread, prompting him to look at opening a top-end Japanese restaurant. In April Ichigo Ichie, where the 12-course kaiseiki or tasting menu costs €95, opened its doors.

“Ichigo Ichie means one meeting, one chance or once in a lifetime – I really liked the phrase. We use local produce and mix them with Japanese foods – for example, we use St Tola Irish goat’s cheese with miso, and we hope that mixing of cultures helps create an experience that people appreciate.”