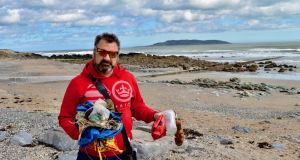 The unrelenting presence of plastic continues to mar Irish coastlines, as demonstrated during this year’s Coastwatch survey

The proliferation of “wet wipes” contaminating Irish coastlines is a new trend featuring in the reports of volunteers participating in the 2018 Coastwatch Shore Survey.

A team of more than 700 volunteers is conducting this year’s survey of more than 500 sites, to be completed on October 15th.

In spite of more sewage treatment plants being built in Ireland in recent years, wet wipes are causing problems in sewerage, blocking pipes and increasingly ending up on coastlines, according to Coastwatch co-ordinator Karin Dubsky.

In pipework they form long “ropes” clogging up systems, many of which ultimately end up in the coastal environment. “They appear like a piece of grey rope on the shores. People don’t realise what they are,” she added.

A lot of people think that because they are made of wood fibres and are flushable that they break down, but in reality they are not biodegradable as some contain plastic fibres, Ms Dubsky said.

The UK government announced plans to ban wet wipes, but the Government here has no plans as yet to follow suit

She welcomed a move by the European Parliament to curb their use and ensure they are genuinely biodegradable. With the amount of harmful plastic litter in oceans and seas growing ever greater, the European Commission has proposed new EU-wide rules to target the 10 single-use plastic products, including wet wipes, most often found on Europe’s beaches and seas.

The UK government earlier this year announced plans to ban wet wipes, but the Government here says it has no plans as yet to follow suit.

Ms Dubsky said other notable findings in this year’s Coastwatch survey include the discovery of “a scrapyard built into the shore” at one location; new access roads built “with not a sniff of planning”, and an “unending amount of plastic litter”.

Continuing problems included “a historic dump face-grinning out with early plastic layers like teeth at the Ringsend Nature Park” in Dublin, and the Bray dump “still eroding unchecked”.

In many locations coastal damage was evident with, for instance, “seawalls with stones missing at their base and even in danger of collapse”.

This was typified in the observation of one North Co Dublin surveyor: “We are not winter storm ready. Despite the Malahide bridge train accident a few years ago and talk about climate change adaptation, we urgently need methodical checks of erosion control infrastructure below public paths and roads and action when Coastwatchers report problems.”

Other issues, Ms Dubsky said, included increasing evidence that polystyrene pontoons used in marinas are littering coastlines, and the further encroachment of aquaculture into biodiverse mudflats in Lough Foyle.

In a new departure, surveying by kayak was tested in Adrigole Harbour, Co Cork, for shores that are difficult to access.

“Kayaking into tiny coves with seals following us was not just magic but also frustrating as lines of marine litter marked the splash zone (the area above the spring high tide line, on coastlines and estuaries),” said Coastwatch regional coordinator Bernie Connolly.

“We still haven’t identified the 60cm-long fossil which has fern-like markings which was found on limestone rocks by surfers in Co Clare,” she added.

Teams are also recording the presence of invasive alien plant and seaweed species increasingly found on coastal land, at estuaries and in waters at such locations. They are also monitoring the presence of a range of jellyfish including the lion’s mane, mauve stinger and Portuguese man o’war, whose number is increasing as water temperatures rise.

The first data returns since September 15th suggest, however, there are far fewer jellyfish than usual and less green algae on mudflats evident this year compared to previous years.