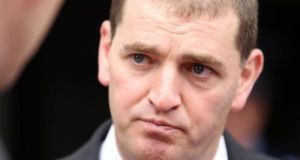 Minister of State for Defence Paul Kehoe: he insists “the Naval Service is meeting its security and defence tasks”. Photograph: Alan Betson

Minister of State for Defence Paul Kehoe was accused of being in “complete and continuous denial” over the inability of Naval vessels to set sail because of a shortage of staff.

Fianna Fail defence spokesman Jack Chambers made the claim after Mr Kehoe told the Dáil that “for operational and security reasons it would not be appropriate to disclose details of the operational deployment of any vessel in the Naval Service”.

Mr Chambers said that was “just a facade and a barrier to allow you to avoid being held properly accountable to the House on defence policy”.

But the Minister insisted that “the Naval Service is meeting its security and defence tasks”.

He went on: “I assure the general public that the Naval Service is capable. The Chief of Staff has assured me that it is well able to carry out its security and defence tasks.”

The Irish Times on Tuesday reported that two vessels were unable to set sail last week because of a crew shortage and that reservists had been brought in to fill staffing gaps on a third ship.

During defence questions in the Dáil on Wednesday, Mr Kehoe said the Naval Serve was intelligence-led and had to prioritise its work carefully.

“It is also important to note that ships do not sail from time to time for various reasons, including weather, mechanical reasons and personnel issues,” he added.

But Mr Chambers rounded on Mr Kehoe and asked: “Who are you trying to fool here?”

He said: “The ships were docked because of the recruitment and retention crisis of recent months and years but you cite operational and security reasons”.

Mr Chambers asked how operational and security tasks were performed if the ships were docked.

Claiming that the Defence Forces and Department of Defence were in “complete crisis”, Mr Chambers accused Mr Kehoe of “completely failing the people”.

Mr Kehoe said he had admitted that “we have human resources challenges in the Naval Service”, but they were engaged in a process with the Public Service Pay Commission. He had engaged with both the Commission and the Department of Public Expenditure and Reform.

Two men injured in Co Clare shooting 08:57
Election 2020: Will Saturday polling day boost turnout? 06:00
‘You’re on your own down here after 5pm’ 05:56
Most secondary schools to close for day in pre-election strike 01:56
Government accused of ‘losing control’ following shootings and stabbing 01:00
SUBSCRIBER ONLY