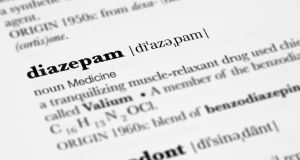 The National Association of General Practitioners has described as “profoundly shocking” reports that children were abusing valium in the city. Photograph: Istock

Children as young as 13 are using valium bought online as a recreational drug, according to the city’s mayor.

Mayor of Galway Niall McNelis said he had been informed by youth groups that valium purchased illegally online was regularly sold in Galway city centre and suburbs.

Bags of up to 50 valium tablets were being delivered by post, young people were getting into debts, and drug dealing gangs were then targeting their families seeking payment, he said.

Mr McNelis, a Labour councillor, said “internet valium” was being ground down for smoking with tobacco and other substances, or taken orally.

He said it was causing both addiction and mental health issues due to the risk of brain damage in young people.

He has called for an inter-agency approach to the issue, which he described as a growing problem in the city.

Helen Kelly of the Dóchas Don Óige organisation, which works with young people at risk in Galway, said it was an issue affecting all income and ethnic groups in the city.

The National Association of General Practitioners (NAGP )has described as “profoundly shocking” reports that children were abusing valium in the city.

NAGP president Dr Maitiu Ó Tuathail said valium was “incredibly addictive” and was now very rarely prescribed by GPs for that reason. “Internet sale of drugs is unregulated, and the buyer has no idea of the strength and constituents of the substances purchased,” he added.

Galway Garda’s divisional drug unit has told Mr McNelis it is working closely with customs and excise officers to combat importation of drugs purchased over the internet.

When larger quantities of drugs are found in the postal system, “consideration is given to conducting a controlled delivery” and several such operations had been conducted in the Galway district in recent years, Galway gardaí have said.

Ms Kelly formerly worked as a police officer in Birmingham, where small drug units working at ground level had been successful in tackling drug problems. In her experience, abuse of alcohol is still the biggest single problem in the city.

“More resources are needed at ground level to tackle this, and resources are also required for both prevention and addiction treatment for young people,” she said.

Mr McNelis said that he was concerned about Garda resources, particularly the small number of community gardaí assigned to suburbs.

“We have a regional drugs taskforce, but we need an inter-agency approach with the Health Service Executive, schools and parents,” he said.

“Existing addiction services in Galway are seriously overstretched, and we need to tackle this while we can,” he said.

1 ‘Summer is not lost’ - Taoiseach announces accelerated easing of coronavirus restrictions
2 California police fatally shoot 22-year-old man on knees with hands up
3 Coronavirus: People to be allowed to travel anywhere in their county from Monday
4 Coronavirus: Seven more deaths in the State and 28 new cases confirmed
5 Covid-19 restrictions: What you still can’t do this weekend
Real news has value SUBSCRIBE