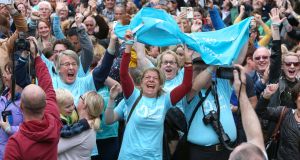 Celebrations in July 2016 when it was announced Galway was to be the 2020 European Capital of Culture. Photograph: Joe O’Shaughnessy

Galway’s European Capital of Culture 2020 project has lost a key board member with confirmation that John Crumlish, Galway International Arts Festival chief executive and chair of the bid committee, has resigned.

In a statement on Wednesday, Mr Crumlish said it was always his intention to remain on the board until negotiations began between the arts festival and Galway 2020 about the festival’s project for 2020 - as in a major commission of “mirrored pavilions” from artist John Gerrard. Mr Crumlish said these discussions were due to begin shortly, and he had stepped down and would wish the board and executive “every success”.

Confirmation of the resignation comes a day after it emerged Druid Theatre is withdrawing its major international production from the Galway 2020 programme.

Druid’s artistic director Garry Hynes told The Irish Times earlier this week that the award-winning theatre company had been forced to pull out due to the Galway 2020 project’s “loss of time, significant budget cuts and communication issues”.

“We have raised our concerns with the chair of Galway 2020 and are in ongoing discussions with them,” Ms Hynes said.

The Druid Theatre decision is a significant setback to a project that is already mired in controversy. Mr Baldwin’s departure in late May of this year, and controversy over the handling of a business engagement director post, prompted a number of city councillors, led by former Fine Gael mayor Padraig Conneely, to express concern about the €46 million project which is already running into funding shortfalls.

Following Druid Theatre’s withdrawal of a major production from Galway 2020 however, Galway city’s current mayor says he is confident the project has “turned a corner”. Mayor Niall McNelis (Labour) said the appointment this week of a new Galway 2020 chief executive, Patricia Philbin, would help to get the project back on track.

The project was still “actively looking” for a creative director to replace Mr Baldwin, who resigned last May, he said.

Both he and Galway city’s chief executive Brendan McGrath have confirmed that only half of the total projected budget of €46 million is secure at this point, in the form of State funding.

Galway 2020 is understood to have told Druid Theatre that it would have to impose a budget cut of almost 50 per cent on the estimated cost of the company’s project accepted for the bid book.

Some two years of work had already been invested in Middle Island, which was due to have been staged on Inis Meain and Corsica with actress Marie Mullen in the lead role.

Ms Hynes stressed that the company was in discussions with Galway 2020 on another smaller project, as yet to be identified.

Galway 2020 said it welcomed the “clarification made by Druid Theatre Company earlier that it has not withdrawn from Galway 2020” and said “following ongoing discussions”, Druid made the decision to “withdraw the proposed Middle Island project” but it believed it was still committed to an alternative. It said it was continuing its discussions with cultural producers.

However, some of those cultural producers are leading 20 other projects, involving major players like Macnas, Galway Community Circus and Music for Galway, who are very concerned about loss of creative vision and budget cuts. They have sought a meeting with the chief executives of Galway city and county which is scheduled for later this week.