Yellow warning issued due to heavy rainfall and flooding risk 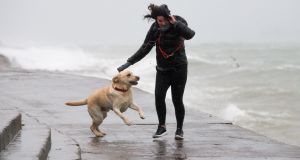 Met Éireann said up to 50mm of rain was expected over the next 24 hours which may present a danger of flooding in places near rivers with already high water levels. File photograph: Tom Honan

Met Éireann has issued a status yellow warning for heavy rainfall starting on Tuesday night and continuing through much of Wednesday for counties Galway, Mayo, Cork, Kerry and Waterford.

A status yellow warning covers weather that does not pose a threat to the general population, but is potentially dangerous on a localised scale.

Met Éireann said up to 50mm of rain was expected over the next 24 hours which may present a danger of flooding in places near rivers with already high water levels.

The absence of neap tides meant then heavy rainfall was unlikely to present a significant danger of tidal flooding, forecaster Gerry Empery said.

Rainfall is expected to be highest in mountainous areas with reduced visibility and hazardous driving conditions. The warning will remain in place until 6pm on Wednesday.

The gale warning is for southerly winds which will occasionally reach gale force eight, on Irish coastal waters from Roches Point to Slyne Head to Rossan Point on Tuesday night.

Temperatures of between 9 and 11 degrees are anticipated across the country with fresh southerly winds on Tuesday night while Wednesday will be very wet and windy.