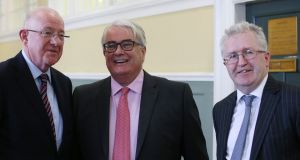 Mr Justice Seamus Woulfe (right)told the review he met someone in the hotel lobby and then went to dinner in a room with six tables and 45 diners. File photograph: Sam Boal/Rollingnews

During her inquiry, former chief justice Susan Denham was told by Mr Justice Seamus Woulfe that he was informally invited to the Oireachtas Golf Society outing in Co Galway by Senator Paul Coghlan.

This had happened while he was still attorney general, said the judge. He was appointed a judge in July and later decided to raise the golf invitation with the Chief Justice, according to the report.

“He said that he had been invited to the Oireachtas Golf Society outing. Mr Justice Woulfe emphasised that it was a non-political event. Mr Justice Woulfe recollects the Chief Justice said something like, ‘I don’t see any problem with that’.

“Mr Justice Woulfe pointed out to the Reviewer [Ms Justice Denham], in fairness to the Chief Justice, that he did not raise the issue as to whether there would be a dinner or not.”

He had never received a written invitation to the event, which did mention a dinner. “He could not have raised the issue of the dinner with the Chief Justice at the time, because he, Mr Justice Woulfe, did not know of the arrangements.”

On August 18th, he drove from Co Donegal, where he was on holiday with his family, arriving at the Station House Hotel, Clifden, at about 6pm.

He was invited to dinner by Senator Coghlan in another hotel in Clifden and was unaware of the public announcement that night about new Covid-19 public dining rules.

It was when paying a fee for the golf outing at Ballyconneely the next day, after midday, that the judge was told there was a dinner at 9pm in the Station House Hotel, and given a voucher for it.

He was assured by Senator Coghlan that the organisers had consulted extensively with the authorities and ensured that everything was in compliance with the Covid-19 rules.

That evening he met someone in the hotel lobby and then went to dinner in a room with six tables and 45 diners. He did not notice that the diners were spread between two rooms, with a retractable partition between them.

“It appears that late in the evening a gap was opened by the hotel staff in the retractable wall behind Mr Justice Woulfe, slightly behind his left shoulder,” the report noted.

“Mr Justice Woulfe stated that he did not know a gap had been opened, at the end of the dinner for the speeches and prize giving.”

When asked about why he had not phoned the Chief Justice for guidance, the report stated, Mr Justice Woulfe had said he assumed that the Chief Justice would have known there would be some social element to the outing.

“He stated that while the Chief Justice would not have known precisely the details, because he [Mr Justice Woulfe] did not know them then himself, but that there was no need to go checking the details with him.”

Mr Justice Woulfe, and his legal adviser, explained that when he contacted the Chief Justice his concern was about judges going to an Oireachtas event because of the separation of powers issue. Covid-19 did not come into it.

Mr Justice Woulfe said that after the dinner he had two drinks in the hotel lobby and then went to bed. The next day he drove back to Co Donegal.