The sound of climate change is silent inaction

We evolved to respond to fast-moving threats, not quantitative slow boils 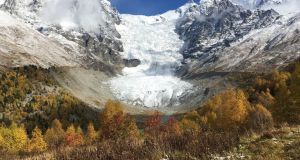 A glacier in the Caucasus mountains

Have you ever wondered what climate change sounds like? Me neither. Until a couple of weeks ago, that is, when I was 3,000m above sea level in the middle of the Caucasus mountains and I heard a glacier. I’d never heard one before and I can’t say I’d ever really considered what kind of noise it might make, so I’m not sure what I expected, but it wasn’t what I got. It sounded like thunder. Deep, rolling, bone-rattling thunder.

The glacier didn’t actually move. No bits broke off. There was no mini avalanche of ice and rock. No cracks appeared (on the face of it, anyway). Just cool, thin air carrying the soundwaves of a vast rumbling groan across the valley.

To most of us, climate change is numbers. It’s percentages, degrees, parts per million, lines on graphs, bars on charts. Targets in reports. Dates. Deadlines. Necessarily so, of course, because numbers are the language of data, and data is what drives the science of climate change.

The science tells us what we think we know about what’s happening to the world we depend on, and helps us understand what the changes might mean for our societies, our economies and our futures.

But numbers don’t make noises. They don’t have colours. You can’t taste them or touch them. They don’t smell of anything. They don’t have feelings. They don’t make you feel. And they make for pretty boring stories. People, on the other hand, like good stories. We respond to the kind of narratives that help us walk around in the shoes of a problem and empathise with it from a perspective we can relate to. Feelings motivate us further than facts could ever drag us.

This shouldn’t really surprise anyone. Humans evolved to respond to fast-moving threats that we could interpret through our five senses, not quantitative slow boils. We are simply not built for a problem like climate change. Stuff we can’t see does things we can’t comprehend on a scale we’ve never experienced? Nah. That’s not a proper apocalypse. There’s no hero. No villain. There aren’t even any zombies.

I sometimes wonder whether, if instead of increasing concentrations of CO2, there was instead a giant asteroid hurtling towards Earth that threatened to plunge hundreds of millions of people into poverty, hunger and thirst, displace millions more, flood our cities, irreversibly destroy vast swathes of habitat and push untold numbers of wild species into extinction, would we respond with the same level of spineless inaction?

Would we be clapping ourselves on the back for agreeing to non-binding targets for asteroid size reduction? In the same week it’s announced that we have 12 years to reduce the asteroid down to a size that would be only manageably destructive, would the minister responsible for failing to reduce his country’s portion instead resign over the inability to stream Netflix in rural areas? (Apologies if that sounds trite. Broadband is important, but hopefully you take my point.)

Somehow, I don’t think so. Were the impacts of climate change driven by an enormous space rock rather than far less glamorous fossil fuels, the greatest minds of the 21st century would be locked in a desert bunker building giant rockets.

Newspapers would lead with the latest asteroid trajectory data on a daily basis. World leaders would speak of the need to unite over existential space rock threats. Hollywood would be producing cinematic asteroid explainer movies starring Bruce Willis. Elon Musk would be live-tweeting the progress of his new intergalactic laser.

The difference between CO2 and asteroids, of course, is that the global economy doesn’t run on asteroids. Which is why the climate change “debate” (if you can call it that, nobody has ever successfully debated with the elements as far as I’m aware) ties politicians in such impossible slipknots, and why we’ve ended up with yet another budget with no meaningful carbon tax.

The sound of climate change to them is the sound of protesters’ chants outside the Dáil; of meek applause at the merest hint of an international promise to do something; of silent inaction. And unfortunately, until climate change starts to sound like the gentle rustle of a vote slipping into a ballot box, it’ll continue to fall on deaf ears.