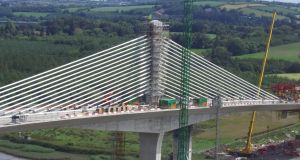 The 887m bridge crosses the Barrow south of New Ross.

The opening of the €230 million New Ross bypass in Co Wexford has been delayed by more than six months because of complexities in the construction of what is to be Ireland’s longest bridge.

The bridge, to be called the Rose Fitzgerald Kennedy Bridge, crosses the river Barrow to the south of New Ross, connecting Stokestown in Co Wexford and Pink Point in Co Kilkenny.

At 887m long the “extrados” type bridge – a combination of cable stay and pier support – is, according to builders Bam Ireland and Spanish firm Dragados, the longest of its kind in the world and the longest of any kind in the State. The 887m length compares with 866m for the length of the Foyle bridge in Derry, and just 465m for the river Suir bridge in Co Waterford.

Overall the New Ross bypass includes 14km of dual carriageway on which traffic diverts from the existing N30 at Corcoran’s Cross, east of New Ross. The route then passes to the south of the town on the Wexford side of the Barrow river. The new bridge then crosses the Barrow and goes on to link up with the N25 Rosslare-to-Cork road at a roundabout near Glenmore in Co Kilkenny.

The bypass was initially scheduled to be open early this year but complexities in the construction of the bridge led to delays and the latest estimate is that it will open in November.

A spokesman for Bam Ireland said he could not comment on the delays but Wexford County Council’s director of services Eamon Hore said the delay was due to “complexities relating to the bridge”.

“It was technically a difficult undertaking and I wouldn’t hold the delays against the bridge builders at all,” he said.

Mr Hore said the council believed the design of the bridge made it a valuable addition to the county and that it would become a tourist attraction.

“Already you can see visitors in parked cars on the lower roads stopping to look at the bridge and there will be a viewing point provided when the bridge is open,” he said.

Mr Hore said the original intent had been to call the bridge after the 35th president of the United States, John F Kennedy, whose ancestors came from near New Ross. He visited the area in the summer of 1963, months before he was assassinated.

Mr Hore said the late president’s sister, former US ambassador Jean Kennedy Smith, had suggested the bridge be named after their mother, in memory of the entire extended family. He said recent research suggested that a third of all visitors to New Ross came because of the Kennedy connection.

A spokesman for Transport Infrastructure Ireland said the opening would be more than six months late, but that the contractors had faced a “very ambitious” time frame given the complexities involved.