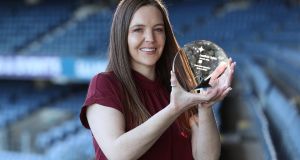 Gráinne Kealy has committed herself to educating other people about the dangers posed by not sitting properly when in the car. She said the comfort of sitting in certain ways is “not worth the risk”. Photograph: Robbie Reynolds

There are very few things that Gráinne Kealy remembers from the serious road traffic collision she experienced in 2006, but what really stands out is how she felt when she first saw her injuries in the hospital.

Ms Kealy had been in the passenger seat, with her feet on the dashboard, while her boyfriend at the time was driving from Galway to Laois.

The vehicle she was in hit a patch of black ice and crashed into a wall. Ms Kealy suffered a brain injury and serious facial injuries when the airbag opened and pushed her knees into her face.

Her injuries were so severe that surgeons had to remove her forehead, and she has undergone numerous operations in the years since.

Speaking after winning the Gertie Shields Supreme Award in road safety, Ms Kealy said: “I don’t remember much. But one of the only memories from that time was when I first saw my face.”

“I made my way to the toilet and looked at myself in the mirror and jumped out of the way, I thought there was somebody behind me, I didn’t even know it was me.”

Since her recovery, Ms Kealy has committed herself to educating other people about the dangers posed by not sitting properly when in the car. She said the comfort of sitting in certain ways is “not worth the risk”.

“I was 22 at the time. My life stopped for 10 years. No work, I had no fire for two of those years, I didn’t really go anywhere, people tend to look, which I don’t blame them. I had so many procedures and operations that I didn’t do anything for just over 10 years.”

Gráinne was one of 17 award winners who were acknowledged for their commitment and dedication to road safety at the Road Safety Authority’s (RSA) Leading Light’s Award Ceremony on Wednesday.

Among the other winners were Sallins Road Safety Action Group which educates the local community on the issue, Garda Janet Gough Ging for her work encouraging children to wear helmets while cycling and the Claire Barden Educational Services in Sligo which teaches road safety to its young pupils.

Speaking at the event, Minister for Transport Shane Ross thanked the award winners for their “passion and commitment to road safety”, adding that it’s not just about meeting targets but about “saving real lives”.

“I would particularly like to commend Gráinne Kealy, not only in dealing with the aftermath and recovery from such a life-changing incident but in using her experience to raise awareness of road safety among young people,”he said. “She is exceptionally brave and as such is so deserving of this award.”

Moyagh Murdock, chief executive of the RSA, said “the number and calibre of entries this year was outstanding and the judges had a difficult task to select one winner in each category.”