Mothers with newborns going from hospital to homeless services

New mothers being placed into ‘one night only’ emergency accommodation 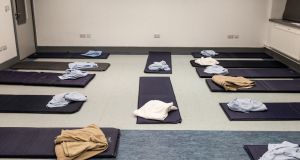 Mothers discharged from maternity hospitals with newborn babies are being placed directly into a cycle of “one night only” emergency accommodation, a legal report on the deficiencies of homelessness services has said.

In one case a mother was forced to move every night for several weeks with a four-week premature infant and a 16-month-old baby, spending much of the winter days on the street.

The Report on Lived Experiences of Homeless Families, published by the Mercy Law Resource Centre (MLRC) on Wednesday, notes an increase in this practice and calls for it to be stopped.

In May 2019, 46 families were placed on one-night-only accommodation, according to its data. By October that number had increased to 72.

A review of files illustrated a failure by housing authorities to “recognise or identify the vulnerability of families put on night-to-nights, including circumstances where there is a newborn infant and/or acute medical issues affecting minor children”.

In the case involving the mother of a premature baby and 16-month-old, it said “she had no safe, secure place to go during the day and spent long periods on the streets exposing her very young children to the winter weather”.

“The client was unable to breastfeed her baby in comfort or to sterilise bottles in safety; she had no space to care for herself properly following discharge from the maternity hospital after giving birth,” it said.

The mother was never told by the authorities why she was on such one-night-only emergency provision, why hers differed from other families’ or how to resolve her situation.

In another case a family needed to refrigerate medicine for their child but could not access accommodation with a fridge. “Their child went untreated for six weeks,” the report states.

In both cases, arrangements changed only following legal intervention. While there have been political calls for an end to, or restriction on, the practice, the MLRC says it continues “and as yet, there has been no direction issued by the Minister for Housing, Planning and Local Government to restrict or cease the reliance on this provision”.

“The cases included in this report are distressing and painful to read,” said MLRC managing solicitor Rebecca Keating.

“We urgently need to see a shift in Government policy to meaningfully address the dysfunctions and failures in the homeless system, so that children do not continue to experience adversity and damage to their well-being, health and educational attainment.”

The report comes at a time of record homeless numbers, even taking into account certain classes of homelessness not included in official figures – including so-called “couch surfers”, those who sleep rough, and others in domestic-violence refuges.

The wide-ranging document covers other areas of the crisis including refusal of emergency accommodation; excessive time spent in hotels and B&Bs; and the failure to recognise specific needs of vulnerable families and children.

Meanwhile, Focus Ireland has called on the Government to urgently implement a strategy to help affected families.

Although homeless numbers have dropped slightly in Dublin, the charity said it remained too high and “causes terrible trauma to any family or individual but it is hurting children the most”.