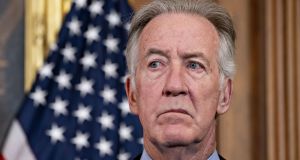 Democrat Richard Neal was one of three congressmen to sign the letter asking British parties to show a ‘continued commitment to an open Irish border’. Photograph: Andrew Harrer/Bloomberg

Three senior members of the US Congress have called on the leaders of the UK’s political parties to uphold the Belfast Agreement on the eve of the British general election.

“It is essential that the hard-won peace of the GFA [Good Friday Agreement] be preserved and not undermined by any Brexit calculations,” said the letter signed by Massachusetts congressman Joe Kennedy III, Ways and Means committee chairman Richard Neal, and Philadelphia Democrat Brendan Boyle. “That peace includes not only an open border between the Republic of Ireland and the province of Northern Ireland but also commitments to improved protections of human, civil and democratic rights, and economic justice for all the communities of Northern Ireland as enshrined in the GFA.”

Noting that the political uncertainties unleashed by Brexit have had a negative impact on all the communities of Northern Ireland, it also notes that it has “slowed essential new inward investment to a halt, ratcheted up sectarian tensions, and contributed to the ongoing stalemate over restoring self-government at Stormont”.

The letter continues: “As leaders of the largest political parties in the United Kingdom, we urge you to take all and any steps in your power to ensure that peace prevails in Northern Ireland, including a continuing commitment to an open Irish border and the protection of human and civil rights for all.”

The intervention comes a week after the US House of Representatives unanimously passed a resolution reaffirming support for the Belfast Agreement, warning that a trade deal between the UK and the US is contingent on the preservation of the peace agreement.

The resolution – which was brought to the House floor by New York Democrat Tom Suozzi and co-sponsored by Republican Peter King – urged Britain and the European Union to ensure that “any exit from the European Union by the United Kingdom supports continued peace on the island of Ireland and the principles, objectives, and commitments of the Good Friday Agreement”.

Introducing the Bill, New Jersey Democrat Albio Sires said the Bill was “a clear signal to the United Kingdom and the European Union – it is a priority for Congress that any Brexit deal must protect the Good Friday Agreement in all of its components”.

Noting this week’s general election in Britain, Mr Suozzi said it would be inappropriate for the US to interfere in another country’s election, but he added: “It is important that the United States makes our position clear on policies in which we have a vested interest.”