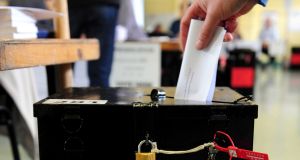 Finola Bruton said the removal of the amendment in the May 25th vote would be “the first time in history that a constitutional right is being taken away”. Photograph: Aidan Crawley/Bloomberg

The wife of a former taoiseach has called for a No vote in the forthcoming referendum on the Eighth Amendment, claiming it will remove a constitutional right.

Finola Bruton, wife of former Fine Gael leader John Bruton – who has also rejected the proposed change – said the removal of the amendment in the May 25th vote would be “the first time in history that a constitutional right is being taken away”.

“A profoundly utilitarian view of human life is determining our ethical and moral understanding of what it is to be human,” Ms Bruton said.

She was speaking at a meeting in Dublin hosted by the Iona Institute, a privately funded company that “promotes the place of marriage and religion in society”.

Ms Bruton said the right to life was “the first and most fundamental of all human rights, without which there can be no others”.

“One cannot exercise any other human right, if one is not allowed to exercise the right to live. We cannot say this often enough. Without being allowed to be born, one can have no civil rights, no free speech, no right to bodily integrity,” she said.

“We must not forget that this drive to repeal the Eighth Amendment is about taking away a constitutional right that is there already. This is unprecedented. The history of our Constitution is that additional rights have been conferred either by amendments or judicial interpretation.”

In a ruling last month, the Supreme Court unanimously found the constitutional rights of the unborn were confined to the right to life set out in the Eighth Amendment, otherwise known as Article 40.3.3. This article recognises “the unborn” as having a right to life equal to that of “the mother”.

The Supreme Court also rejected a High Court finding the unborn is a child within the meaning of Article 42A, which requires the State to vindicate the rights of “all children”.

In her speech, Ms Bruton was also critical of the media and of journalists who have spoken about abortion from a pro-choice perspective.

She criticised the “dismissal” of what she claimed were “long-term consequences” of abortion to women by professionals, doctors and psychiatrists, describing them as “patronising”.

Ms Bruton also addressed the issue of adoption, which she said was “another area being neglected in this debate”.

“Of course, the sad reality is that it can never come back to ask why it was let die. Yet, many, as already mentioned are haunted by bitter regret after making such a decision [to terminate a pregnancy],” Ms Bruton said.

“An adopted child offers a peace, even if tinged with great sorrow, that an aborted baby can never offer. Adoption exists under our law and it is a child-centred, as distinct from an adult-centred, solution to an unwanted pregnancy.”