Voters will not be ‘fooled’ by Government in abortion campaign 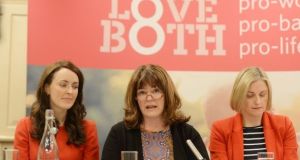 The Government is set to find out that the Irish people “cannot be fooled” into believing that repealing the Eighth Amendment will allow anything other than abortion on demand, an anti-abortion rally has heard in Cork.

Legal consultant to the Pro Life Campaign, Caroline Simons said Minister for Health Simon Harris was seeking to present the proposal to allow abortion up to 12 weeks in all cases as somehow being restrictive.

“Minister Harris knows repealing the Eighth Amendment means abortion on demand and they are trying to convince us that it is restrictive,” she said to loud applause. “But they will find out that the Irish voters cannot be fooled - we will not be fooled, we will reject their pretend restrictive measures.”

Ms Simons said that even in England, women had to give some notional reason for seeking an abortion. She said the head of the Pregnancy Advisory Board there had said this was why 97 per cent of women seeking abortions there cited mental health reasons.

She said this had led to 186,000 abortions in England in 2016. However, she said should the proposals put forward by the Government be enacted, women seeking abortions would not have to give any reason at all up until 12 weeks. Beyond that, she said, they could seek abortions “on vague health grounds, mental or physical up to viability”.

Addressing the rally which organisers estimated attracted a crowd of 2,000, but which gardaí estimated was attended by up to 1,000, Ms Simons said the referendum was solely about the removal of the Eighth Amendment to the Constitution which she said saved at least 5,000 lives annually.

“What the vote on May 25th is about, is removing the only constitutional protection that the unborn child has.”

Ms Simons urged people to ensure they would not end up looking back in years to come with regret that they did not do enough to save the Eighth.

The rally, which was attended by a wide range of people from teenagers to pensioners and included a handful of clerics, also heard from US anti-abortion campaigner Claire Culwell, who survived an abortion at five months in which her twin was killed.

Ms Culwell told the crowd how she was born 10 weeks prematurely a month later, weighing 3lbs 2ozs to her then 13-year-old birth mother. She urged Irish people not to make the same mistake as was made in the US, where she said one in three women have had, or will have, an abortion.

Bernadette Goulding, of the abortion recovery support group, Rachel’s Vineyard, recalled her own abortion in London when she was told by doctors that it was “a quick-fix, but no one told me that there is no quick fix for (the) regret” that she had seen repeatedly in her work.

Ms Goulding said those in favour of abortion were hesitant when it came to recognising the reality of post-abortion grief as that would mean that “they would have to recognise the death of a baby which may somehow interfere with the political argument for abortion”.

She also recalled her own experience where she would have said anything to obtain an abortion, but once she had undergone it, she found that her relief was short-lived.

“The pregnancy was gone but I felt so empty. I had nightmares about my aborted baby,” she said.

“I suffered from guilt, shame, depression, anxiety and I felt I should apologise to the ground for even walking on it. I had no self esteem and every challenging event that happened in my life after that, I believed I deserved it. . . Women who have had abortions, we find many ways to punish ourselves.”