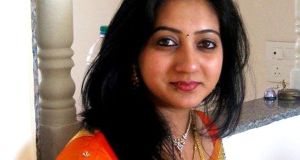 The father of Savita Halappanavar, who died at University Hospital Galway in 2012 after a septic miscarriage, has called for a Yes vote in next month’s abortion referendum.

Andanappa Yalagi, speaking from the Indian state of Karnataka, said he had not known of the ballot, on May 25th, on whether to repeal the Eighth Amendment to the Constitution and liberalise Ireland’s abortion laws.

The 31-year-old dentist, who was 17 weeks pregnant, died on October 28th, 2012, a week after coming to hospital with severe back pain. She was found to be miscarrying. Her requests for an abortion were turned down because doctors could still detect a foetal heartbeat. Her condition deteriorated over the following days, and she went into septic shock with multiple organ failure.

Three inquiries identified serious lapses in Ms Halappanavar’s care, including delays in blood-test results, failures of communication between doctors about her deterioration, and failure to recognise sepsis.

A Health Service Executive investigation chaired by Prof Sir Sabaratnam Arulkumaran noted: “International best practice includes expediting delivery” – that is, by terminating the pregnancy – “in this clinical situation of an inevitable miscarriage at 17 weeks . . . and infection in the uterus because of the risk to the mother.”

Mr Yalagi, a retired engineer, was contacted by The Irish Times on Tuesday. He had not been contacted by anyone from Ireland “for many years” and had not been asked about the family’s wishes as to whether his daughter’s name and image should be used, either by pro-choice or by anti-abortion campaigners.

Mr Yalagi said Yes campaigners should use his daughter’s image in their efforts to change the State’s abortion laws.

“Of course. It should be shown. The rules in Ireland about abortion should change . . .

“I want people to remember her. It is a long time. It is six years, and the law still has not been changed. I am surprised change has not been implemented. I request that all Irish people vote Yes for this law to change.”