Grogans in Dublin city centre has been closed for eight months 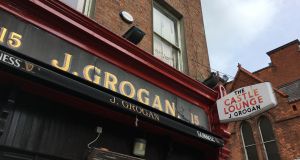 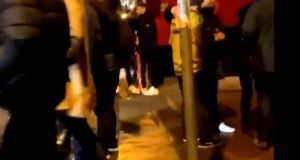 Video footage of hundreds of people gathered on Dublin’s South William St on Saturday evening has left a well-known local business owner angry as he has been forced to stay closed for eight months.

The footage, which was circulated widely on social media, shows large crowds drinking on the city centre street and on surrounding streets in an apparent breach of Covid-19 lockdown rules.

Under the Government’s Level 5 restrictions in place across the State, so-called “wet pubs” that do not serve food can offer a take-away or delivery service only.

The regulations also state: “It is possible to meet with one other household in an outdoor setting which is not a home or garden, such as a park, including for exercise.No other social or family gatherings should take place.”

Daniel Smith of Grogan’s Pub on Castle St first aired his concerns on Twitter on Sunday morning. “Eight months closed yesterday. Deemed unsafe to operate by Nphet and Gov. Is this safer?,” he asked as he shared the footage of the crowds in the area.

He said his premises had been left “in a disgraceful state this morning with tons of rubbish and people using it as a toilet. We are furious this morning.”

When contacted by The Irish Times, Mr Smith said the footage and the rubbish the crowds left behind had “put me over the edge.”

“I am livid ,” he continued. “We are all just so fed up, We have been closed since March and not put a cent through our till since then as we have completely adhered to the rules.

Clearly nearby properties don't have to follow the rules. Our premises is in a disgraceful state this morning with tons of rubbish and people using it as a toilet.

We are furious this morning. https://t.co/qLti0gPTKQ

“But then you see pubs selling takeaway pints and people buying drink in off-licences and coming down here. We had it in June and we have it again now, it has been going on long enough.”

He said there had “easily been at least 400 people on the street. Where the guards? Surely they knew there was such a large congregation of people in the area?”

In response to queries from The Irish Times, a Garda spokesman said it had responded to the reports of crowds gathering and moved to bring it under control.

“Gardaí attended the scene and requested all persons to disperse,” the spokesman said. “Gardaí maintained a presence in the area. No breaches of regulations were detected. A number of patrols were conducted in the area over the course of the evening.”

The spokesman said that in supporting the Covid-19 public health guidelines and regulations the Garda “has and will continue to adopt, a graduated policing response based on its tradition of policing by consent. This has seen Garda members engage, explain, encourage and, as a last resort, enforce”.

Mr Smith stressed that he did not want to point the finger at any businesses but stressed that things would have to change. “I am not out to scald anyone or any business and it has been a hard year for all of us, we all know that. But it is just too much,” he said.

He told The Irish Times that that on several mornings in recent weeks he has been left to clean up rubbish, urine and faeces from directly outside his pub and he highlighted the impact such gatherings would have on businesses desperately hoping to reopen next month.

“I would be very concerned that Nphet and the Government would look at footage like this and use it as a reason not to allow pubs to re-open despite the fact that we are a controlled environment and behave much more responsibly than this.”

On Saturday, publicans warned Government they have no interest in opening their bars for Christmas if the State moves from Level 5 to to Level 3 restrictions in December.

Level 3 restricts restaurants, cafes, and bars to takeaways and deliveries and outdoor service to a maximum of 15 people only.

During the last Level 3 lockdown in Dublin, “wet pubs” which do not serve food were ordered to remain completely closed.

Taoiseach Micheál Martin told the Dáil on October 20th the target was to move to Level 3 restrictions across the State in early December from the current Level 5 restrictions. On Friday, Mr Martin repeated that Level 3 was still the target.

Vintners Federation of Ireland (VFI) chief executive Padraig Cribben warned that Level 3 restrictions over Christmas would result in large numbers of people crossing the Border into Northern Ireland to socialise in conditions where rates of Covid-19 were “four times higher”. He said moving to Level 3 limits would therefore be counter-productive, as those who travelled across the Border to socialise would be bringing the virus back here.

Asked on the RTÉ’s News at One Programme on Saturday about reopening at Level 3, Mr Cribben said: “Nobody has any interest at any time of the year, it is not viable, it is not practical.” Regarding the prevailing weather at this time of year, he said: “If you look at a day like today, it is just not on.”