'We’ve all lost a great friend': Book of condolence to Gay Byrne opens in Dublin 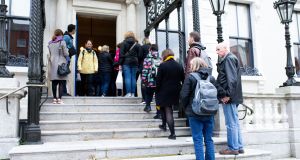 The queue to sign a book of condolence for broadcaster Gay Byrne in Dublin’s Mansion House. Photograph: Tom Honan

The queue of people lining up to sign one of the five books of condolence opened for Gay Byrne in the Mansion House in Dublin was long throughout Tuesday, and within a couple of hours more than 1,000 signatures had been recorded.

Joe Duffy was the first to sign the book and he was joined soon afterwards by Ryan Tubridy, who said that while a book of condolence had also been opened on the RTÉ campus in Donnybrook, he had wanted come into to the city centre to sign the book as a fan rather than as a colleague or successor.

Fianna Fáil leader Micheál Martin was also among the early signatories as was his party colleague Seán Haughey.

“I am a Dub and he was a Dub and we both lived on the northside so I am here as a neighbour as much as anything else,” Mr Haughey said.

He added that while Byrne had never interviewed his late father, former Fianna Fáil leader and taoiseach Charles Haughey, their paths had crossed on many occasions.

“My father always had huge respect for him,” he said. “I remember Gay visited him shortly before he died and I’m not sure what they talked about but I think they sorted out any issues they may have had.”

While many of those who signed the book were doing so because they felt a bond with the man they heard on the radio or watched on the television, others had a more personal connection.

Des Byrne was Gay’s cousin and four years his junior. “He used to lord the age difference over me when we were young and I remember he always had the good toys,” he said with a smile.

He said the outpouring of affection for his older cousin had been “magnificent and I genuinely haven’t heard anyone say a bad word about him.”

Audrey Craven certainly didn’t have anything but praise for the late broadcaster.

She is the president of the Migraine Association of Ireland and said she felt compelled to come into the city centre to sign the book out of gratitude to Byrne for his help when she was starting out.

“I set up a support group for people with migraine 25 years ago and wrote to Gay to let him know and he had me on his radio programme. We were just a support group at that stage, but within a few years we had six migraine clinics open and lot of that was down to me being on the Gay Byrne Show.”

He also performed the official opening of the clinic in Beaumont in November 1998. “I think one of the reasons he was so interested in what we were doing was because Colette of ‘roll it there Colette’ fame had migraine,” she explained. “I just think his passing is very sad and I feel like we’ve all lost a great friend.”

He was certainly a friend to Joanne Sharpe in the 1950s when her grandparents lived across the road from his family home in Dublin 8. Her husband Colm Gowran was in his year in the CBS on Synge Street and Byrne had been the best man at her cousin’s wedding.

“I remember one time we were both on the No 19 – going to Rialto obviously,” she said.

“I was going to visit my grandmother and he was going home. I had a cousin who was in hospital and we asked him to play a record on the radio for them. He said my auntie thought he had a big job in RTÉ, ‘but I’m just the timekeeper and I don’t get to play the records’.”

Within a couple of years Byrne was playing the records and calling the shots in his big job in RTÉ and Sharpe said she had followed his career for decades after that afternoon on the 19 bus.

There were younger people signing the book too. Richard O’Sullivan said he was paying his respects to a man who was “very important in Irish life and a person who talked about stuff that nobody else wanted to talk about.”

He was also there because of the memories Byrne rekindled within him. “I have really good memories of sitting on the couch on a Friday night with my parents watching Gay Byrne on the television.”

Those memories were echoed by Michelle McCarthy who also grew up with Byrne on the Late Late Show. “I remember my mum telling me about him talking about contraception and stuff and that was just such a no-no back then and then there was the toy show which was a really big deal for all of us and obviously I remember Boyzone appearing on the show. That was a big moment for people of my age.”

Eileen Satelle was of a different generation and didn’t care much about Boyzone but she and the younger woman shared some views. “He was just a great presenter,” she said. “He was always willing to bring up topics that no one else wanted to talk about. Divorce, abortion, contraception and of course that poor girl in Longford [Ann Lovett, who died after giving birth to a stillborn baby outside Granard, in Co Longford]. It is the end of an era really, it’s so sad. I don’t think young people understand now how great he was.”