Boil water notice: Thursday at ‘earliest’ before warning for 600,000 lifted 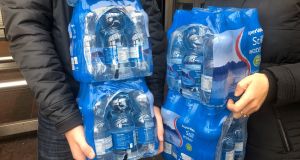 There were low stocks of water in Supervalu Castleknock due to the Boil Water notice issued in the greater Dublin Area by Irish Water last month. Photograph: Alan Betson

It will be Thursday at the “very earliest” before a boil water notice affecting 600,000 homes in the greater Dublin area is lifted, Irish Water has said.

The chair of Oireachtas Committee on Housing Noel Rock questioned senior Irish Water officials on Tuesday about tests still that remain to be carried out before the notice can be lifted.

A boil water notice was reimposed on Monday evening less than a fortnight after the last one was lifted.

Those in the areas affected by the boil water notice can use only boiled or bottled water for drinking and in food preparation.

Three rounds of samples must be taken, including a sample on Wednesday evening before the notice can be lifted.

Irish Water confirmed there are still a series of steps to be taken before the notice can be lifted including satisfying criteria set out by the Environmental Protection Agency.

In this context Thursday is the “very earliest” the notice will be lifted, Irish Water said.

A Boil Water Notice is in effect for all those supplied by the Leixlip Water Treatment Plant. For areas affected please see below map. pic.twitter.com/2KyqSsEczo

The utility also said upgrade work on the Leixlip water plant will not be completed until next year.

In a statement to the Oireachtas Committee on Housing on Tuesday, the managing director of Irish Water Niall Gleeson said ideally the old part of water processing plant would be taken out of service in order to complete necessary upgrades “quickly and efficiently.”

“Unfortunately the lack of headroom in Dublin’s water supply means the plant must remain operational and we have to do this work on a phased basis. This work started in 2018 and will be completed next year,” he said.

Mr Gleeson described the company’s efforts to refurbish the old Leixlip water plant as being like “trying to change the tyres on a car while it is still heading down the road”.

He said as a result repairs have to be carried out as the plant is still operating.

The assistant secretary general of the Department of Housing Feargal Ó Coigligh said the operation of Ireland’s water system was “not fit for purpose.”

“Without pre-determining the outcome of investigations into the exact operational issue at Leixlip, it is clear that there is a critical gap in control between Irish Water’s legal responsibility for providing water services and local authorities’ operational responsibility on the ground. This is not satisfactory and is no longer fit-for-purpose,” his opening statement to the committee says.

“These ‘boil water notices’ are a major disruption to people and businesses across a large part of our capital city and surrounding areas in Kildare and Meath.”

He said Minister for Housing Eoghan Murphy had expressed “deep concern regarding these incidents, in particular in the light of the EPA’s audit of the Leixlip facility following the first boil water notice.”

“The lessons of the audit in March 2019 did not appear to have been learned” referring to an earlier audit of the plant which highlighted alerts not being immediately responded to.

Mr Ó Coigligh said the Minister has sought a report from the EPA on the first boil water notice.

“This report will outline the conclusions of the agency’s investigation and any findings which may require a broader policy response. The Minister will consider this report once he has received it.”

These new arrangements will provide Irish Water with the necessary “control of operations, accountability and capacity to manage risk”. They will “ensure that Irish Water is not left without an appropriate skilled workforce to carry out its statutory functions and local authorities are not left with stranded costs.”

Finally the new arrangements will also seek to address the concerns of workers in relation to “the future deployment of the current local authority water staff.”