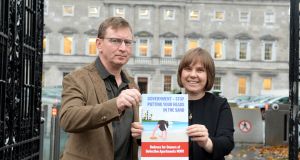 Apartment owners from more than a dozen different complexes across Dublin who face repair bills due to construction defects have come together to form a lobbying group looking for State redress.

The Construction Defects Alliance will address the joint Oireachtas Committee on Housing on Thursday, when it will tell members of its aim to have the Safe as Houses report implemented.

In 2016, an Oireachtas housing committee report, Safe as Houses, recommended the establishment of a redress scheme to assist homeowners whose defective houses were built prior to the 2014 building regulations. It suggested a number of funding mechanisms, including an industry levy and a tax rebate scheme.

The Construction Defects Alliance is led by Kath Cottier, director of housing services with Clúid Housing, who is also chair of the Beacon South Quarter owners’ management company.

I really think there has been an injustice for people, and I see how it really does affect people’s lives

The alliance also has the support of the Apartment Owners’ Network as well as people involved in more than a dozen developments near Swords, Blanchardstown, south Meath, Dublin city centre, Dublin 6, Dublin 12, Stillorgan and Sandyford.

Speaking to The Irish Times, Ms Cottier said the purpose of the group is to “hold the Government to account”.

“We have been a bit of a lone voice for a long time because people are very worried about the effect [of speaking to the media] on their property. People can come along and join us, and not be very visual.

“I really think there has been an injustice for people, and I see how it really does affect people’s lives. It’s about money, but it’s also about stress, and about being comfortable where you live and your home as well.”

Ms Cottier says a number of political parties have shown interest in the construction defects issue, but she would now like to see proposals on manifestos in the lead-up to the next general election.

“Many political parties are very interested, they genuinely do understand the concerns and the issues that we’re presenting. We would like recognition of that in people’s manifestos so that there is an opportunity when it comes to forming a government and deciding on the programme for government, it is given a high priority.”

Andrew Prior, a homeowner in Beacon South Quarter, is originally from Bradford in the UK, where a fire engulfed the soccer stadium and killed 56 people in May 1985.

“I’m acutely aware of the danger of fire. It’s ingrained in me. So just to hear that [the apartment was a fire risk] . . . it was quite terrifying.

“This is not our fault. The reality of it is that we bought this apartment for €375,000, the Government got €44,500 in VAT on that when we bought it, which is a considerable amount of money.

“The builder won’t engage and the solicitor tells us it’ll be €750,000 as a minimum to take a case, with a 20 per cent chance of success – but I did nothing wrong. I have done nothing wrong here,” Mr Prior said.

“To date groups of owners who have discovered latent defects in their homes have been left to their own devices, and it was a very long and frustrating process trying to work out what needed to be done.

“The fact that a very significant group of homeowners have come together is very positive and hopefully that group can now put pressure on the State to do something about it.”