‘The best’ schools in Ireland? Give me a break 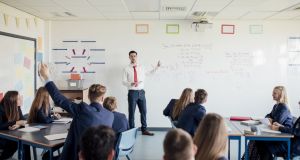 Young people who demonstrate leadership, judgment, courage, empathy, and tolerance will be the beacons of their generation. Photograph: iStock

It was a promise to publish a list of the country’s 400 very best post-primary schools in a recent promo for a recent Sunday broadsheet newspaper that sucked me in and piqued my interest.

It seemed that my educational philosophy professor of 50 years ago who insisted that “there are no absolutes in education” was about to be proven wrong.

Because on a quick perusal it became apparent that the one and only benchmark used to determine the “best” schools was the percentage of their students that went on to third-level education.

Surely then we could shut down those non-performing schools and save the State a shedload of money.

Unfortunately, that would mean closing almost all of the special education schools in the country.

Whereas closing the schools themselves would be no loss, a lot of sensitive folk might be upset at the thought of children with special needs and profound needs being abandoned.

So maybe that would be overly extreme.

Allowing for an unhindered stream of consciousness though a more modest proposal suggests itself, one which would satisfy all parties.

There it is, problem solved and money saved and everybody goes to college. Happy days.

Daft? Yes, because back in the real world it’s different.

All of the pupils in St Michael’s have special needs including some with profound disabilities.

All of the pupils in St Vincent de Paul’s are from the city’s most socially disadvantaged area with high unemployment and where many end up in prison.

All of the pupils in St Boris’s which is fee paying have been enrolled as high achievers from wealthy, supportive families.

Then consider the questions: what is the function of these schools? What do we expect of them?

In the business of compiling the “best schools” list, which is the winner and which receives the wooden spoon?

But, in truth, the exercise is pointless. We are grading apples, oranges and pears.

None of this is to suggest that parents should not have access to all relevant information about a school.

Neither is it to belittle or infer that the staff and management of schools included in the so called “best schools” list are in any way flawed.

Lists that short circuit or ignore that, and celebrate academic performance to the exclusion of all else, are not simply inaccurate. They are misleading. The education system of a democracy must aim to produce citizens with the qualities that a functioning, successful community needs.

Those young people who demonstrate leadership, judgment, courage, empathy, and tolerance and exercise them strategically, rationally and reasonably will be the beacons of their generation.

These qualities do not arrive wrapped in a degree scroll.

But the schools that seek to cultivate them in their pupils are building the community.

Whereas schools that reduce themselves to the denominator of degree fodder are doing themselves and society a disservice.