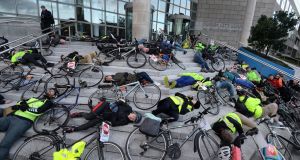 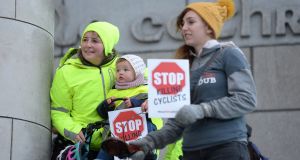 Nearly 100 cyclists staged a ‘die in’ outside Dublin City Council’s Wood Quay offices on Tuesday to raise awareness of the dangers of living and commuting in a city that they say lacks adequate cycling infrastructure.

The protest was held following the death of Neeraj Jain in a collision with a cement truck near St James’s Hospital last Friday.

The cyclists gathered at 8.30am at Christ Church and slowly cycled in convoy to the council’s head office, where participants spread out across the office steps before lying down on the ground for five minutes.

When security staff emerged from the building and accused the protesters of creating “an inconvenience” they were met with shouts of “dying is inconvenient too”.

One participant, who spoke briefly but did not give his name, told the crowd he was leaving an early morning hospital appointment at St James’s Hospital on Friday when he came across the aftermath of the collision in which Mr Jain died.

“I’m not going to give any details out of respect to him but all I can say is it was utterly horrific,” he said. “Sharing our streets in an uncontrolled way with vehicles like that is utter madness and it has to stop.”

Ciarán Ferrie, a member of I Bike, which organised the demonstration, said he had met many people since Friday’s incident who have stopped cycling in Dublin because they are “too frightened”.

“We’re left feeling our lives are at risk every day,” said Mr Ferrie. “The reason we’re here today outside Dublin City Council is because they have a responsibility to respond to the tens of thousands of people who cycle in this city every day. The infrastructure isn’t there, the enforcement isn’t there and in some cases the legislation isn’t there.”

He added: “Why do we have cycle lanes that are only operable part of the day? Why do we have 24-hour cycle lanes that don’t have bollards on them? Why don’t we enforce illegal parking on these? These problems could be fixed with very little money but there doesn’t seem to be the acknowledgement within the council that this is as serious an issue as it is.”

Colm Walsh, also a member of I Bike, said Ireland should feel “mortified” by its lack of cycle infrastructure. He said the international Velo-City cycling conference saw 1,500 people from around the world gather in Dublin earlier this year and many were “appalled by our lack of safe infrastructure, not just for cyclists but the way pedestrians are treated”.

Oisín O’Conner, who led Tuesday’s protest, said the council had an urgent responsibility to follow up on previous commitments and plans to improve the city’s cycling infrastructure.

She said the council is implementing the Greater Dublin Area cycle network “as and when funding, resources and statutory approvals are available”. She said the council strongly supports the National Transport Authority’s Bus Connects project, which aims to provide more than 200km of segregated cycle network in the city. Other initiatives such as a city centre heavy goods vehicle ban have improved safety for cyclists, the spokeswoman added.

The I Bike campaign will hold a number of die-ins this week with Wednesday’s action taking place outside Dáil Éireann between 1-2pm.