Derek McGrath overwhelmed by support as team is greeted by up to 10,000 fans 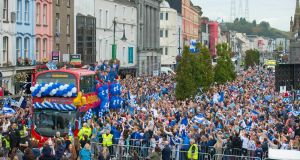 Waterford hurlers on board an open-topped bus are greeted by thousands of fans in the city on Monday evening. Photograph: Patrick Browne

If longing won All-Irelands then the current Waterford team would be crowned champions in the morning such was the warm reception they received Monday evening when they returned to the Crystal City following their narrow defeat to Galway in Sunday’s decider.

Waterford is a proud hurling county and the 58 years since its last All-Ireland success hangs heavy as the modern heirs to legendary hurlers such as the departed John Keane, Tom Cheasty, Philly Grimes and Ned Power strive to bring Liam MacCarthy back to Suirside.

But while the current crop fell short just as the great team of Dan Shanahan, Tony Browne, Ken McGrath, John Mullane and Paul Flynn did in the 2000s, there can be no mistaking the affection that the people of Waterford have for their modern heroes.

Bedecked in blue and white and waving flags of every shape, up to 10,000 fans began gathering on the quays from 5pm and although their heroes were delayed and did not arrive until 7.30pm, it did little to dull the fans’ enthusiasm as the open-topped bus inched its way down from Edmund Rice Bridge.

Awaiting them on the podium were five survivors from the successful 1959 team, Martin Óg Morrissey, Larry Guinan, Michael O’Connor, Austin Flynn and Freddie O’Brien, providing yet further inspiration to the current team that they too will savour success.

Mayor of Waterford City and County, Cllr Pat Nugent caught the mood of the evening when he paid tribute to Derek McGrath and his team for not only being tremendous ambassadors for Waterford but for providing so much pleasure and joy to people from Waterford at home and abroad.

Waterford County Board chairman, Paddy Joe Ryan similarly paid tribute to the players and management for the sacrifices they made and he took the opportunity with members of the city and council on the podium behind them to ask them to help out with the refurbishment of Walsh Park.

As the team smartly suited in blue were introduced, each was greeted with ever loudening cheers. The shouts and applause seemed to rise to deafening levels for 2016 Hurler of the Year, Austin Gleeson, veteran Michael Brick Walsh and Captain Fantastic Kevin Moran.

But perhaps fittingly the loudest cheer of the evening went up for McGrath who steered his charges to an All-Ireland final with victories over Kilkenny, Wexford and Cork, only to fail at the final hurdle to an exceptionally talented Galway team.

McGrath revealed he was “overwhelmed” by the turnout coming when the team was in “an emotional quandary” between disappointment at the defeat and yet being very heartened and proud by the totality of effort, before promising that Waterford would not give up in their quest for the grail.