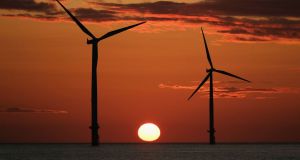 The sun rising beyond a wind farm. The restructuring of subsidies provides for a wide range of energy sources but is “technology agnostic”, ie it does not favour one energy source over another. Photograph: Getty Images

Home-owners and businesses are set to face a significant increase in electricity costs to help pay for new subsidies for renewable energy under an overhaul planned by Minister Denis Naughten.

The changes to the renewable electricity support scheme (RESS), which will now go out for public consultation, are designed to help Ireland meet demanding CO2 emissions targets by 2030.

However, the price rises caused by increases in the Public Service Obligation (PSO) levy which is paid by all electricity consumers are expected to fall away as the cost of producing green energy falls.

Currently, the money collected from the PSO levy is used to subsidise renewable energy generation and peat-burning power plants operated by Bord na Móna. It is also used to secure the Irish electricity supply.

Details of the RESS were published on Monday by Minister for Climate Action and the Environment Denis Naughten. The RESS endorses the most successful models used elsewhere, notably in Denmark, Canada and Scotland, which also promote community participation in renewable electricity projects.

“Communities and citizens will actively participate in and benefit from renewable projects in their local area,” Mr Naughten said.

Major developers will have to facilitate community involvement in any of their projects approved for RESS support. In Denmark developers have to offer a 20 per cent community share ownership for wind projects with turbines larger than 25m.

Separately, there will be supports for community groups who propose appropriate projects with ring-fenced funding. As a consequence schools, sports clubs, farmers and other groups will be able to participate in the scheme. If approved they will receive support for the renewable electricity they generate and get access to the national grid.

The restructuring of subsidies provides for a wide range of energy sources but is “technology agnostic”, ie it does not favour one energy source over another. Instead projects will have to go through a process of “competitive auctions”, which Mr Naughten said was “the best way to ensure value for money for electricity consumers, enhancing the security of supply and broadening the renewable technology mix”.

The RESS, however, excludes on cost grounds support for individuals proposing “micro and small-scale renewable generation” such as householders using roof top or “ ground-mounted” solar panels.

The Minister has asked the Sustainable Energy Authority of Ireland to examine how best micro-generation can be supported.

The Solar Energy Association of Ireland gave a cautious welcome for some solar aspects of the RESS but criticised the lack of clarity and ambition in the document. Its chief executive Michael McCarthy said: “We still don’t know what the Government wants to do with capacity. There’s no clear timeline. There is no budget indicated.”

There was no ratio between wind and solar provided, while the association was dubious about its “technology-agnostic aspect”. He added that when the UK adopted such an approach it resulted in “wind, wind and more wind” being supported.

He said solar energy was key to Ireland reaching its targets for renewable electricity as it could be rapidly deployed.

The auction structure should have indicated how the energy cake was going to be divided. “The aggravating thing is the solution is there but they are not grasping it.”

A spokesman for the Department of Climate Action and Environment confirmed RESS would be structured to allow auctions for specific sources of energy.

“The scale of transformation needed to meet our low carbon transition targets cannot be overstated. If we are to reach those targets we must harness the combined efforts of the entire country,” Mr Naughten said.

“Industry, of course, has a key role to play in bringing to market technology options that deliver, at scale, solutions to minimise and manage costs for households and businesses alike. But industry cannot do this alone. My department has listened to citizens, to communities and to other stakeholder groups.”

Stakeholders and members of the public are requested to submit their views to RESS@dccae.gov.ie by November 3rd.