Hauliers ‘teetering on brink’ due to costs of Irish registration 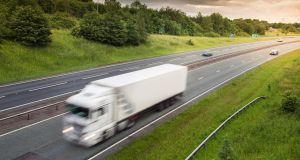 More then 30 per cent of Ireland’s haulage industry has moved abroad in the last four years and remaining firms are “teetering on the brink”, the Irish Road Haulage Association has said.

The association said October’s budget had the capacity “to make or break our sector”, claiming that regulations and costs in the Republic had made the State the most expensive place in the EU for hauliers to set up.

Hauliers from Eastern Europe were legitimately operating in Ireland on a fraction of the cost bases, said the association.

Association president Verona Murphy said many firms in the industry were now perched on the edge of liquidation, which could leave the State with no indigenous haulage operators to take vital exports abroad.

She said “emergency measures” needed to be introduced by Minister for Finance Paschal Donohoe in the budget to address the “grave and unprecedented challenge being faced by the licensed road haulage sector in Ireland”.

* Budgetary measures to address the change in Vat on tolls

* A commitment that the sector will have certainty in the operating environment through no new State imposed costs or charges for at least 36 months.

Listing the regulations in place for 3,700 licensed hauliers Ms Murphy said there was a very real danger of “disruption to the efficient and timely distribution of goods within the State and to export markets if licensed hauliers are forced out of business”.

While the effects of Brexit were being negotiated, Ms Murphy said the 20 per cent reduction in the value of sterling had contributed with fears of a hard Brexit to a “perfect storm”.

“Licensed hauliers play a vital role in the national economy by distributing goods to consumers and businesses throughout the country. We also play a core role in helping distribute Irish exports to foreign markets. However the challenges our sector are facing are not sustainable and we need an emergency response from Government,” said Ms Murphy.