Empathy levels of doctors ‘not properly tested’ in entry exam 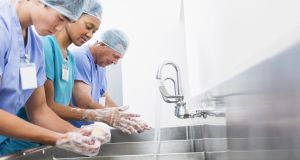 Empathy levels and emotional intelligence are not being properly assessed under the Health Professions Admission Test (Hpat) which was introduced to make medical school more accessible to aspiring doctors. Image: Getty.

Empathy levels and emotional intelligence are not being properly assessed under the Health Professions Admission Test (Hpat) which was introduced to make medical school more accessible to aspiring doctors, researchers claim.

Doctors from University College Cork (UCC) say results from the Hpat assessment, which is a requirement for students hoping to pursue a career in medicine, were not consistent with students’ self-reported empathy levels.

They said a review of the Hpat assessment was needed to ensure the State’s future doctors have the necessary emotional intelligence to communicate with patients in highly stressful and difficult situations.

Dr Donnchadh O’Sullivan, one of the authors of the report, recommended that the Hpat be updated to include a mini-interview process or “situational judgement testing” to gauge the empathy levels of incoming medical students.

“The Hpat came in for three reasons; to find students who are more empathetic, to widen access to medical school and to bring the Irish medical schools’ curriculum policy closer to international norms,” said Dr O’Sullivan, who passed the Hpat test in 2011. “Our study doesn’t say the Hpat is useless. It’s just saying that we didn’t find a correlation between the Hpat scores and empathy levels.”

He added: “From the get go in medicine we’re taught the most important trait we need is to be kind. It’s essential for getting on with other people and getting on with the patient.

“Once you’re in the workplace those who have the communication skills and empathy are the ones who really shine as good doctors. Work ethic and trustability, these are the most important skills.

The release of the UCC study coincides with reports that the BioMedical Admissions Test (Bmat) - used to assess UK students applying for medical courses - is providing a “rigorous, transparent, careful and considered approach” in its assessment of incoming medical students.

Researchers from the Cambridge Assessment Admissions Testing group say the Bmat plays an important role broadening access to medical school to students from diverse backgrounds. It also found the assessment could “predict which students are most likely to be successful in medical study”.

Asked whether the Bmat included a review of empathy levels, senior research manager Kevin Cheung said the test did not claim to assess empathy and was “designed to complement other selection methods” and used to predict “those most suitable to be successful in medical study rather than clinical practice”.

The Hpat test was introduced in 2009 as an additional assessment on top of a student’s Leaving Cert points score to determine whether they were suitable for a career in medicine.

The UCC study, which was published in the British Medical Open Journal and was carried out during the 2014/15 academic year at UCC, underlines how empathy is regarded as one of the most important competencies required by health professionals.

A spokeswoman from the Department of Education said the Hpat was not a State examination and that the selection process was a matter for the Deans of medical schools at higher education institutions.