Row centres on cut in agency pay to €34 an hour, which HSE says is 36% above staff rate 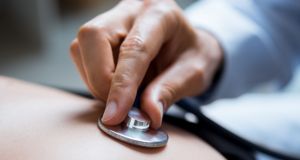 Services in a number of hospitals could be hit by wildcat doctors’ strikes in the days ahead due to a row over reduced pay rates. Image: iStock.

Hospitals in some parts of the country have been hit by wildcat work stoppages by doctors in a row over cuts in pay.

The HSE said on Monday it had been advised that a small number of medical staff employed through agencies – as distinct from being employed directly by the health authority – had indicated that they may not turn up for their rostered duty this week.

The Irish Association of Emergency Medicine said that some of the doctors who had been affected by the reductions in pay had chosen not to attend for their shifts in hospitals on Monday.

It warned that, in the absence of doctors, some hospital emergency departments will cease to function.

Some Ministers have been warned privately by doctors affected by the pay reductions that up to 150 agency medical staff may decide to stop work from Monday and that the row could lead to the closure of up to 7 hospital emergency departments in the coming days.

The dispute centres on a new framework directive governing the provision of short-term/temporary medical agency placements which the HSE believes could generate savings of up to €53 million on agency staff costs over the next 4 years.

As part of the new arrangements, payments to agency doctors are to be reduced from €40 to €34 per hour.

However, the HSE argued that these fees were still 36 per cent higher than the amounts paid to directly-employed doctors and were on a par with competitors in the UK.

The HSE said one of the reasons behind the introduction of the new framework was “to bring greater equity to pay between agency staff and those who are employed by the HSE”.

“This disparity has caused considerable difficulty in retaining doctors and nurses within our system.”

However, it is understood that some agency doctors have written in recent days to politicians warning that they would not work for the lower pay rates.

“Arising from the implementation of the framework agreement, the HSE has been advised that a small number of agency medical staff have indicated that they may not turn up for their rostered duty this week,” the HSE said. “There are well-established and agreed procedures to deal with this. The HSE would urge all staff to comply with these agreed procedures. These procedures are in place in the healthcare environment in order to ensure continuity of care to patients and clients.”

A number of hospitals are particularly dependant on agency doctors, given on-going difficulties in securing permanent medical staff. Senior health figures suggested it would be hard to maintain all services in the event of agency doctors not turning up for work.

Doctors involved in the dispute who contacted some Ministers in recent days warned that the work stoppages could hit emergency departments in hospitals such as Navan, Naas, Limerick and Portlaoise as well as one in Dublin.

The HSE said it was working is working with hospital groups on contingency measures to support the continued provision of care. “Hospitals will continue to work with the contracted employment agencies to source staff and will continue to assess the position over the coming days.”

The Irish Association of Emergency Medicine said on Monday night that it was very concerned that a number of emergency departments across the country had been left very short of key medical staff as a result of the dispute over the new framework directive.

It said the directive was intended to cap the pay of locum doctors.

“The Association’s concerns are based solely on the safety implications of rosters that are missing doctors which puts at risk the safety of patients attending emergency departments --a cornerstone of the acute hospital system.”

“The Association is acutely aware that in some hospitals the majority of medical staff are employed through locum agencies and in these hospitals the emergency departments will cease to function in the absence of doctors.”

A spokeswoman for the Minister for Health Simon Harris said he was “being kept informed on this issue by the HSE”.