People will not be covered if they travel to countries on safe list, insurers warn 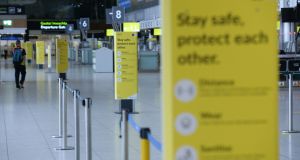 Signage in the departures area of Terminal 1 at Dublin Airport. Photograph: Alan Betson

There have been warnings that the publication of a green list on Monday may lead to confusion, as Ministers have clarified that non-essential travel advice will remain in place.

Minister for Public Expenditure Michael McGrath told RTÉ Radio the intention was on Monday the Cabinet would consider the publication of a green list of countries. He said the overall non-essential travel advisory would remain in place but people arriving from and returning from the green list of countries would not have to restrict their movements for 14 days.

“We are not encouraging Irish people to travel abroad at this time,” he said.

The Government plans to ease travel restrictions to and from some countries with the publication of a list of countries on Monday with similar coronavirus infection rates to Ireland. Travellers returning from those countries will not have to self-isolate for 14 days.

However, Dr Cillian De Gascun, chair of the expert advisory group to NPHET told Newstalk radio that: “From a public health perspective we want people to stay at home this summer. Having a green list , while you can understand the logic behind it, there is a risk it will lead to some confusion and provide people with mixed messages”.

In an interview on On the Record with Gavan Reilly, he said: “We’re hearing that from members of the general public and seeing it on social media that it is providing some difficulty for people. It would be nicer and cleaner to have a single straightforward message that people can buy into. But, as I said, there are decisions that the Government has to make for the good of the country and they’re looking at a bigger picture,” he said.

“You can see the logic to it [the green list]. If we have people coming in from countries where their 14-day cumulative incidence rate is the same or indeed lower than our own, yes you can make the argument that they’re not going to provide an increased risk to the country.

“You can understand the logic in terms of trying to facilitate some kind of travel if that’s what the Government wants to do but from a NPHET perspective, we really don’t want people to travel for this year.

“The most successful countries in controlling Covid-19 have had 14-day quarantine periods on arrival. From a NPHET perspective it would be nice to see a stronger mechanism in place, because we do know that people are arriving,” he said.

Minister for Agriculture Dara Calleary said the green list is being established because we are going to be living with Covid-19 for some time. “Non-essential travel is still out and not recommended” he told RTÉ’s The Week in Politics. He said there had to be a structure for business travel and for people coming into the country.

Sinn Féin health spokeswoman Louise O’Reilly told the programme that even if countries are on the green list the Government is saying no non-essential travel is still in place but on the other hand they are publishing a green list.

Labour Transport Spokesman Duncan Smith said the green list “ will create as many problems as it resolves”.

“The clear public health advice is still to avoid all non-essential travel yet many people will take the publication of the list as permission to travel to those locations. The indications from the Government is that people still shouldn’t travel but that has not been confirmed. That needs to be quickly clarified tomorrow.”

“The advice seems to be that Irish people should not travel abroad but visitors from those countries on the green list do not have to quarantine. If that is the case then there is a clear need for refunds, vouchers, or the ability to rebook at a later date for holidays Irish people have booked but are being told not to take. Planes will still be travelling but people won’t be able to get refunds.

People who travel outside of Ireland have also been warned they will invalidate their travel insurance even if the country they visit is on the green list of safe countries to by published on Monday.

The publication of the green list will not change that advice meaning that anyone who decides to travel overseas will be doing so without any financial safety net should they fall ill or be the victim of a crime while overseas, according to a fresh warning from the umbrella group representing the sector.

While people in possession of a European Health Insurance Card (EHIC) will be able to access medical care in most public hospitals in Europe, they will have to bear the costs of private treatments or repatriation if it necessary and that can run to tens of thousands of euro.

They will also have no cover for lost bags, criminal damage or cancelled flights while they are overseas.

Insurance Ireland, has advised all would be travellers planning on booking a holiday to a green list country “to check with their insurer as to whether they are covered first,”

A spokeswoman pointed out that a green list “does not equate to a relaxation of the non-essential travel policy. Government advice still remains that only essential travel should be undertaken and we await further clarity on any change to this position.”

Public health expert Dr Gabriel Scally calling for increased restrictions on people arriving into the country, told RTÉ Radio this was a “seminal moment in the whole Covid story” in Ireland. There is a “fork in the road. One way leads us to zero Covid Ireland and normal life resuming.,” he said, the other brings a “very bumpy time” in the coming months. He aid he understood there was pressure from the airline and tourism industry but “I would prefer to take the safe road and keep it out,” he said.

The US and the UK are almost certainly not going to feature on the list while climbing coronavirus infection rates in Spain, Portugal and France are likely to rule out their inclusion as well.

As of Friday evening, eight European countries had lower rates of infection than Ireland based on the figures on 14-day cases: Norway, Finland, Hungary, Estonia, Lithuania, Latvia, Cyprus and Malta.

Several other countries were considered borderline for inclusion and may not be on the initial list but could be added when the list is reviewed again in two weeks’ time. Infection rates in Italy and Greece were on Friday only marginally higher than in Ireland.

Meanwhile on Saturday Ryanair said it is “absolutely not” putting its business interests ahead of public health concerns and “travel is not the bogeyman” when it comes to the spread of Covid-19.

The airline’s chief executive Eddie Wilson once again castigated the Government for what he said was its “half baked quarantine” and he called for travel restrictions to be lifted for countries across the EU, with, he suggested, the exception of Sweden.

He denied that he was making the call to protect Ryanair and pointed out that flights to and from the Island of Ireland amounted to about 8 per cent of its total business.

Instead he expressed concern for Irish tourism operators who, he warned, were facing bankruptcy unless visitors from overseas were allowed to travel to the country unimpeded by any Covid-19 related restrictions.

“Saying we are closed for business with this half-baked quarantine is not going to work,” Mr Wilson told RTÉ Radio One’s The Business with Richard Curran.