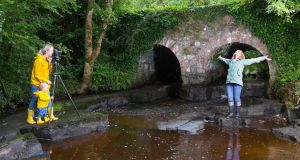 A Co Leitrim hotelier has said while the consequences of the 14-day quarantine requirement for overseas visitors will be economically catastrophic, he does not want tourists who have not followed the rule staying at his hotel.

Joe Dolan, a director of Fáilte Ireland and former president of the Irish Hotels Federation, said public health “has to take precedence over commercial reality” during the Covid-19 pandemic.

“I would frown on overseas visitors who had not quarantined coming into my hotel,” he said.

Mr Dolan, who owns the Bush Hotel in Carrick-on-Shannon, said he was “speaking with my heart and not my head” and understood the logic of the 14-day isolation requirement.

“I wish it were not the case, but it is probably necessary. But the economic consequences for Ireland will be catastrophic because this will eliminate all short-stay visitors, including from the UK, our biggest market,” he said.

He was speaking in advance of the launch of Enjoy Leitrim, a three-minute promotional video he has commissioned showcasing the benefits of visiting and living in the county.

The video includes contributions from locally based writers and musicians including Michael Harding, Seamus O’Rourke, Eleanor Shanley and Charlie McGettigan, and will be launched on Thursday on the Leitrim Tourism social media channels.

Edwina Guckian of Dreoilín Productions, who made the video during the lockdown, said the timing meant she was forced to focus on the county’s landscape rather than its people.

“Myself and the four artists who were involved wanted to get the message across that we should appreciate what we have here, and this has been brought home to us during the pandemic,” she said. “We want people to know there is more out there than the Ring of Kerry and the Cliffs of Moher.”

Mr Dolan said the current circumstances were making it extremely difficult for the tourism sector in Leitrim and around the country to operate, with many businesses expected to decide at the end of the summer whether to shut up shop for the winter.

“For some it will be a case that they will lose less money by being closed than by staying open,” he said.

He added that while the Government’s Wage Subsidy Scheme had been crucial to the survival of many businesses including his own during the pandemic, other measures were needed such as waivers on rates and water charges.

The owner of the 65-bedroom hotel, who laid off his staff at the start of the coronavirus lockdown, said he had 65 staff at the height of last year’s tourist season but only about half of that number had so far returned, though others were due back next week.

“I would have to close my doors tomorrow without the Wage Subsidy Scheme,” said the hotelier, who believes he is luckier than many as almost 80 per cent of his business is domestic.

He said the general consensus in the hotel sector was that while “you can’t get a cottage in the country for love nor money”, hotel room occupancy would be 25-33 per cent this year with consumer confidence a big factor.

Mr Dolan also said a Government announcement about a package for the hospitality sector was expected and he believed a lot of businesses would need a non-repayable grant scheme to bridge the difference “between what we need to borrow and want we can afford to repay”.

A cut in the VAT rate for the sector would be a key factor in stimulating bookings and sales, he added.

“The last cut in VAT was very effective , the most innovative job creation strategy after the financial crisis,” he said.