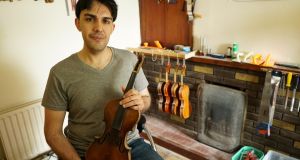 “It’s a miracle really, my life. I came here to Ireland without anything, but now I have a lot. In six months I have got a lot of things and I am sure I will make amazing things in Ireland in the future.”

Al, who does not want to use his full name for personal reasons, came to Ireland from Greece just over six months ago after fleeing the war in Syria.

The 30-year-old, who is living in the refugee reception centre in Ballaghaderreen, Co Roscommon, has been busy. He crafted a violin from scratch after a Mayo man donated his entire workshop to him.

Dave Teehan, who lives in Charlestown - a Co Mayo town about 15 minutes from Ballaghaderreen - had a fully stocked violin workshop after spending years making the instruments.

However, he could no longer work after developing an allergy to the wood.

“Someone told Debbie (Beirne, a volunteer and friend of Al’s) about this violin maker, Dave, and when I went to ask him how many times can I come here to work and he said, no, you can take them. You can take the tools.

“He shocked me. Before that I thought maybe if I can just get one chisel, or two maybe, but then he said you can take all of this. It was such a big generosity.

“I forgot to say thank you because I was so shocked.”

Al soon found himself with every material he could possibly need; aged maple wood, dozens of chisels in different sizes, precise measurement tools and Stradivarius templates.

“The Irish people in Ballaghaderreen are friendly and everyone around here is good. Everyone welcomed me and said if you want help I will help you,” he says.

“I believe if I make a good thing in my life, I believe it will come to me again.”

Al says his experience in Ireland is in sharp contrast to the strife he has overcome to get here.

“I left Syria because the situation is terrible there. I went to Turkey and then to Greece on a plastic boat. It was very dangerous.

“The smugglers say you will arrive to Greece in one hour, and everyone says OK that’s good, because it’s just one hour. But actually it takes five hours in the sea, and it’s very dangerous.”

In Syria he worked as a university lecturer in agricultural engineering, specialising in food science, and was working towards a PhD before the war cut his studies short.

His father ran a carpentry workshop, where Al learned the craft of working with wood, a skill which stood to him when he taught himself how to make violins.

His father was eventually forced to close the workshop, “because nobody needed kitchens and bedrooms because it’s so difficult there”.

The workshop was then lost forever “because a bomb dropped on it”.

He says he always knew he would find himself another workshop in the future, and remembers quite clearly a conversation with his brother.

“When I was in Greece with my brother, we were in the same room and I tell him I want to continue making violins in Ireland.

“My brother said this is just dreams, because maybe everything is expensive there, the tools, and it will take a long time to collect money if you want to make a workshop.

“And I said no, really, I feel something inside that I will get it when I move to Ireland. Really.”

After months of work Al is now in the final stages of completing his first violin and hopes it will carry the “soul” of all the people who have been on this journey with him.

Before he glued the body together he had people sign the inside of it - Debbie Beirne, the volunteer who helped organise the workshop for him, Dave Teehan who donated the workshop, Jacqueline Mullen, the manager in the hotel, and other friends and refugees he has met in Ballaghaderreen.

“I hope these words will survive forever. Some people cried when they were writing on it, and I ask some people why the tears? What you feel?

“One of my friends told me you make me very happy because I feel something inside. I told them you have given part of your soul to this violin.

“I’m very proud that they have written on it and I hope it survives forever.”