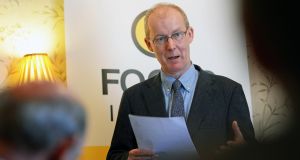 Mike Allen, director of advocacy at Focus Ireland, said the report reflected the “enormous difficulties faced by the over 1,000 families that are homeless”. Photograph: Eric Luke

The health of homeless children in emergency accommodation is deteriorating, with families living off takeaway food and eating meals on their beds or the floor, according to a new report.

The report, commissioned by the homeless charity Focus Ireland on behalf of the Departments of Children and Health, found homeless families, some of whom had been living in emergency accommodation for up to three years, had limited or no access to kitchen facilities and ate fast-food supplemented by crisps and biscuits.

The Food Access and Nutritional Health of Families in Emergency Accommodation report, by Dr Michelle Share of Trinity College Dublin and Marita Hennessy of NUIG, found unhealthy eating habits were becoming “normalised” and parents reported their children were gaining weight and becoming constipated.

Figures released by the Department of Housing last Friday revealed 7,941 homeless people – 5,046 adults and 2,895 children – were in emergency accommodation in June, a 30 per cent increase on the same time last year.

The research, to be published on Wednesday, examined the issue of food poverty across the emergency accommodation services and included detailed interviews with 10 families living in hotels, B&Bs and hostels for between one month and three years. Those running the facilities were also interviewed, and the accounts given by parents “aligned with those of the service providers”, the researchers said.

All families reported consuming more takeaway meals than before they moved to homeless accommodation.

However, the researchers found “none of the participants demonstrated a lack of knowledge or awareness about food and nutrition”.

All families ate either off their beds or on the floor. In an attempt to reduce the number of takeaway meals, parents resorted to “improvised cooking techniques” such as boiling food in a kettle.

All parents had concerns about their children’s consumption of food with low nutritional value and the longer-term impact on their health. “For those with babies and toddlers, there was evidence of compromised weaning practices, poor quality diets, and poor food socialisation.”

Digestive and other health problems were common but while not all participants reported physical health difficulties, mental wellbeing was an issue among all participants.

Mike Allen, director of advocacy in Focus Ireland, said the report reflected the “enormous difficulties faced by the over 1,000 families that are homeless and living in emergency accommodation.

“But it is also a very positive and forward-looking report, setting out useful guidelines and standards which should inform the development of the new family homeless hubs.”