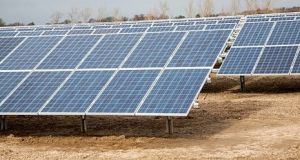 Solar energy is receiving renewed interest around the world following claims that the cost of solar photo-voltaic technology fell 80% from 2008 to 2013. Photograph: Getty Images

Plans for a major solar energy farm on a 27-hectare site in Co Wicklow have been approved by Wicklow County Council.

The permission comes as the Government is preparing a new renewable energy support scheme scheduled to be operational by the first half of 2018.

The solar farm near Rathnew, north of Wicklow Town, includes photo-voltaic panels covering an area of 182,120sq m on steel frames, with a maximum height of about 2.5m.

The solar farm is being proposed by BNRGN Millvale Ltd, which is understood to be backed by David Maguire of BNRG Renewables, a firm which has extensive solar power interests in the UK and has already been linked to plans for solar farms in Co Cork.

The 10-year permission covers underground cabling, fencing and access tracks as well as an electrical sub-station. The permission is currently under appeal to An Bord Pleanála, with a decision expected next month.

Solar energy is currently receiving renewed interest around the world following claims from the industry that the cost of solar photo-voltaic technology fell by 80 per cent from 2008 to 2013.

While solar energy farms are significantly less visually intrusive and do not create noise , Ireland has no renewable energy support scheme for solar power – unlike wind energy.

However, Minister for Communications, Climate Action and Environment Denis Naughten has warned wind farm developers not to expect too much support from Government.

Earlier this year he told the Energy Institute – an international body for professionals in the energy field – there were already enough solar power applications in the pipeline to provide more than 4000MW of the Republic’s energy requirement.

Mr Naughten said approval for grid connections and providing a renewable energy subsidy for of all current solar power applications would be very expensive.

Meanwhile, Mr Naughten has warned local authorities not to vary their county development plans to block the development of wind farms.

He wrote to city and county councils last Thursday reminding them of the need to facilitate State policy in relation to renewable energy targets.

If Ireland fails to meet a binding target of generating 16 per cent of energy from wind, solar, biomass and other renewable sources by 2020, a penalty of up to €120 million will be imposed by the EU for every 1 per cent the State falls below target.

Mr Naughten reminded councillors he had powers under section 31 of the Planning and Development Act to overturn county development plans where they adopt measures which are contrary to Government policy.

The Minister took action after it emerged that a number of county councils, including Laois, Wicklow, Westmeath and Donegal, adopted development plans which could restrict the deployment of wind farms.

In addition to restrictions by various councils, planning permissions for more than 200 individual wind farms are currently before the courts.