Homeless children forced to eat on their beds or the floor

Chips, Coke, crisps and sweets are items most often consumed by homeless families 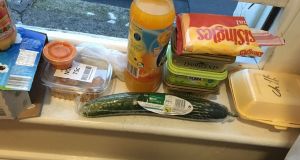 Children must not be allowed to grow up thinking it is normal to eat on a bed or the floor, Nuala Ward, director of investigations with the Ombudsman for Children, has said.

Ms Ward was speaking on the publication of a Focus Ireland report on the difficulties faced by homeless families in accessing healthy food and having normal family meals.

The report, funded by the Departments of Children and Health, found that families living in emergency accommodation were relying on takeaway and snack food and eating meals on their beds or the floor.

With families living in Bed & Breakfasts and hotels for up to three years, these facilities should no longer be termed “emergency” accommodation, Ms Ward said.

“Families are living in what is described as emergency accommodation long term – these are unsuitable, unsafe, inappropriate places for children to grow up in.”

Despite the best efforts of parents, she said, food, particularly babies’ bottles, was being prepared in unhygienic conditions, and children were eating in the same room where the entire family slept.

“Who among us grew up in a family where it was normal to eat on a bed?”

She said she was particularly struck by one of the recommendations of the report that families should have access to a kitchen table.

“How did we get here, that we are reduced to asking our Government to provide a kitchen table for children to eat at?”

The report by Dr Michelle Share of Trinity College Dublin and Marita Hennessy of NUIG made 10 recommendations to improve the lives of families in emergency accommodation.

In addition to a kitchen table, families should have flexible access to kitchens and cooking facilities and a set of standards in relation to food provision and access to cooking, storing and dining facilities should be established for emergency accommodation, and for the new “family hub” facilities.

The family hubs, which, unlike hotels and B&Bs, are designed specifically for homeless families, should have unrestricted access to kitchens, including adequate storage, preparation and cooking facilities.

The report also recommends that nutrition education programmes should not be considered as an appropriate intervention for homeless families resident in emergency accommodation.

“The challenges families face in the preparation of nutritious meals are primarily due to practical barriers and restricted facilities, rather than any lack of awareness of healthy eating,” the report said.

Chips, Coke, milk, crisps and sweets were the food items most frequently consumed by homeless families and “daily fruit and vegetable consumption was low”.

However, the researchers found “none of the participants demonstrated a lack of knowledge or awareness about food and nutrition”.

All families ate either on their beds or on the floor. In an attempt to reduce the number of takeaway meals, parents resorted to “improvised cooking techniques” such as boiling food in a kettle.

All parents had concerns about their children’s consumption of food with low nutritional value and the longer term impact on their health. “For those with babies and toddlers, there was evidence of compromised weaning practices, poor quality diets, and poor food socialisation.”

Figures released by the Department of Housing last Friday revealed 7,941 homeless people – 5,046 adults and 2,895 children – were in emergency accommodation in June, a 30 per cent increase on the same time last year.