Woman denies murder of ex-husband and assault of his brother 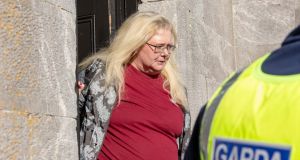 A 44-year-old man found lying surrounded by blood had been stabbed 28 times and four of the wounds were potentially fatal, the trial of his ex-wife charged with his murder heard today

Assistant State pathologist, Dr Margot Bolster told the trial of Rita O’Driscoll that she found a total of 28 stab wounds on the body of Timmy Foley when she carried out a post mortem on October 8th, 2018.

Dr Bolster told Monday’s hearing that the 28 wounds she found ranged from very superficial ones which were almost like pin-pricks to one that was 12cm deep and although none were through bone, four were potentially fatal.

These included an incision to Mr Foley’s carotid artery in his neck while they also included a stab wound to his lung, another to his liver and a fourth wound to the vein between his right arm and heart.

“While none of these wounds were immediately fatal, the one to the carotid artery would have led to a very rapid collapse because of the loss of so much blood,” she said, adding that this incision on the neck was 3cm long.

“The cause of death was haemorrhage and shock due to multiple stab wounds,” Dr Bolster told the eighth day of the trial before a jury of five men and seven women at the Central Criminal Court sitting in Cork.

She said that Mr Foley had several wounds to his hands and arm which were all defensive in nature while she also confirmed that no great force would have been required to inflict any of the wounds as they did not penetrate bone.

Crossexamined by defence counsel, Roderick O’Hanlon SC, Dr Bolster said she could not say what sequence Mr Foley received the wounds which extended from his ankle to his neck but the one to his carotid artery was significant.

“I can tell you once the carotid wound in the neck was inflicted, Mr Foley would have collapsed fairly quickly . . . certainly in the long term, any of these four wounds would have been fatal.”

Dr Bolster said that she was shown a knife which gardaí recovered from the scene which consisted of a 10cm long blade with a single cutting edge and the wounds were consistent with being inflicted with it or a similar knife.

Today, the jury also heard memos of interview with Ms O’Driscoll conducted by Det Garda Pat Prendergast and Det Garda Donal O’Dwyer following her arrest in which she alleged that the late Mr Foley began attacking her.

Ms O’Driscoll told the interviewing gardaí that Timmy Foley had stabbed her six times previously but she had forgiven him but she said he began laughing at her after Jason Foley attacked her from behind on the night in question.

“I said he [Timmy] was evil and satanic. He had a black-handled steak knife. He drove it into my head, the side of my head. I put my hand up to save my head. He cut my hand with it,” she told the gardaí at interview.

She said that they had all been drinking that night and that Timmy Foley and Jason Foley began arguing over whether Jason should be drinking vodka because he was on medication for an acquired brain injury.

“Him [Timmy Foley] and Jason started arguing. Jason picked up the knife. He stabbed Timmy a couple of times. I said, ‘Stop Jason.’ Last thing I saw him lying in a pool of blood on the floor.

“I suffered battered wife syndrome. I was trying to protect myself when I stabbed him twice. He nearly killed me a couple of times. He broke my hand with an iron bar when I was pregnant with my child… my son.

“They [Timmy and Jason Foley] are evil people .... I did not kill Timmy. I am not a murderer. I am a very good person with a good heart. All I did my whole life was help people. He was a controlling person.” The case continues.