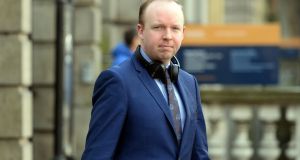 Fine Gael TD Noel Rock: If his Bill becomes law, the resale of tickets for large concerts and sporting events for more than face value will be banned. Photograph: Eric Luke

VGL, the company behind ticketing website Viagogo, has been campaigning in recent months to stop an anti-touting Bill becoming law.

The company obtained advice from a senior counsel which stated the legislation would be in breach of constitutional rights to property ownership. It has also lobbied politicians and warned that hundreds of jobs in Limerick will be at risk if its business model is damaged by the proposed legislation.

Fine Gael TD Noel Rock’s Bill would prohibit the selling tickets for events at designated venues for more than face value, thereby limiting the profit margins of resale websites. On Friday, Mr Rock said tickets for the highly anticipated Ireland versus England Six Nations rugby tie next weekend had appeared on Viagogo for as much as €2,700.

He said it was the latest proof of the need for legislative controls on ticket reselling and expressed the hope that his proposed Prohibition of Above-Cost Ticket Touting Bill will complete its passage through the Dáil by St Patrick’s Day.

In response a Viagogo spokesman said tickets sold on its platform were “genuine tickets that have been sold on by the original ticket purchaser in good faith”.

He said it was a marketplace “and doesn’t buy or sell tickets”.

“Viagogo provides a platform for third-party sellers to sell tickets to event goers. Sellers set the prices, and the reality is that any tickets listed at silly prices rarely, if ever, sell.”

If Mr Rock’s Bill becomes law, the resale of tickets for large concerts and sporting events for more than face value will be banned.

Mr Rock told The Irish Times his Bill had previously moved at a “glacial” pace, in large part due to the level of behind-the-scenes lobbying.

Newly published lobbying records show VGL Support Services Ireland Ltd, the Irish entity of its multinational parent, lobbied 17 TDs and Senators, mainly from Limerick and surrounding areas in the four months to the end of December.

The company engaged a PR company and submitted its own representations to politicians separately, including legal opinion on the Bill.

The legal submission suggested that the Bill would be “extremely vulnerable to challenge by reason of its likely infringement on constitutional rights granted by [the Constitution]”.

It argues the Bill “would run contrary to EU law” and would “undermine the public’s ability to resell and purchase genuine tickets through secure channels”. The senior counsel-authored document also warned that the law would have a “significant risk to existing jobs” in Viagogo’s Irish operation in Limerick. It employs about 275 people there.

It also suggested that the Bill, which would give the Garda the authority to seize tickets they were of the view were being sold in contravention of the law, “may also be in conflict with presumption of innocence and/or the right of citizens to their good name”.