Phil Hogan confirms he would like second term as European Commissioner 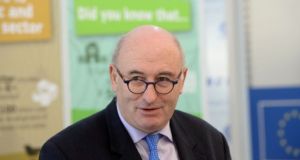 Political sources have previously said Mr Hogan could change brief if he remains at the Commission. File photograph: Alan Betson

European Commissioner Phil Hogan has publicly indicated for the first time that he is open to serving a second five-year term in Brussels.

Mr Hogan, who is nearing the end of a stint as the EU’s agriculture commissioner, said he would be “positively disposed” to staying in the European Commission.

A new commission is established in the aftermath of elections to the European Parliament, which are held every five years. The next European elections take place at the end of May.

It has been widely expected in political circles that Mr Hogan would seek a second term, but his comments to his local radio station in Kilkenny, KCLR, are believed to be the first time he has given a public indication.

“That is a matter for the Prime Minister or a matter for the Taoiseach in the case of Ireland, ” Mr Hogan said. “He has to make his mind up about these matters, probably around June or July.

“I am realist in politics, always have been. If I am asked to consider continuing in the Commission - of course, I will have to wait until I am asked - I will consider it, but I would be positively disposed towards considering.”

Political sources have previously said Mr Hogan could change brief if he remains at the Commission. It is understood Taoiseach Leo Varadkar has not yet given Mr Hogan a commitment on the issue.

The appointment of Ireland’s EU commissioner is in the gift of Mr Varadkar. Former tanaiste Frances Fitzgerald was also linked to the role but has since declared that she wants to stand in the European elections for Fine Gael in Dublin. Mary Mitchell O’Connor, the Minister of State for Higher Education, has also expressed an interest in standing for Fine Gael in the Dublin constituency.

Others in Fine Gael are also considering standing for the European Parliament. Another Minister of State, Wexford TD Paul Kehoe, is understood to be interested in being a party candidate in the Ireland South constituency, which stretches from Wicklow to Kerry and from Waterford to Offaly. The constituency will become a five seater. Waterford TD John Deasy has also privately expressed an interest to senior party figures.

The two outgoing Fine Gael MEPs, Deirdre Clune and Sean Kelly, are also standing. They are based in Cork and Kerry respectively, but a third candidate is likely to run in the eastern side of the constituency.

1 Dublin farmer discovers overnight rave on his land
2 Coronavirus: 188 new cases and no further deaths amid concern over eight counties
3 Children removed from care of parents after claims they were ‘stripped and flogged’
4 Cork publican opts to remain closed for another two weeks
5 Work to stabilise land after ‘suspected tunnelling’ behind terrace could cost €300,000
Real news has value SUBSCRIBE