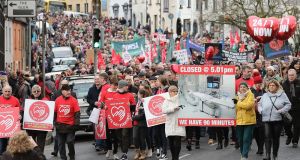 Lobbying techniques successfully applied in recent referendums are being adapted for use by campaigners in Waterford in support of their call for improved cardiac services in the southeast.

Along with the use of catchy slogans, attractive visuals, individual case studies and broad alliances between campaigning groups, those lobbying for a 24/7 cardiac service in Waterford have effectively recruited local businesses to the cause.

The support of up to 200 local firms for the campaign helps explain the success of last weekend’s march in the city, which saw up to 10,000 people protest in support of a round-the-clock cardiac service at University Hospital Waterford (UHW).

The South East Broken Hearts rally sought to highlight the lack of interventional care at UHW, where a permanent catheterisation lab operates from 9am to 5pm Monday to Friday, performing angiograms, along with scheduled and emergency stenting.

A temporary mobile cath lab at the hospital which offers a diagnostic service but cannot provide treatments such as stents has been provided to help reduce waiting lists. It too is a 9am to 5pm service.

Patients who require emergency cardiac care outside of the operating hours are required to be transferred to Cork University Hospital, where a 24/7 service is provided.

The new approach has injected fresh impetus into a campaign that appeared to be flagging last year in the face of Government resistance to agree to its main demand for 24/7 services while promising a limited increase in daytime provision.

Declan Brady, of World Wide Wines in Ardkeen, is one of the businesses actively supporting the campaign. His view in that the current level of cardiology services at UHW is an example of Waterford being left trailing by Ireland’s other cities.

He believes last weekend’s turnout is a response to the “manner in which the Government has been neglecting us”. He added: “We’re being beaten down here, in my opinion, in Waterford city and the southeast.”

Garvan Mulligan, an optometrist at Specsavers opticians in City Square shopping centre, got involved because of “the percentages” deciding a patient’s survival from cardiac issues.

“It’s a stenting facility that’s available for 39 hours a week out of 168, so straight away we’re playing the percentage game.”

He said one staff member’s husband was lucky enough to be able to avail of the service during daytime hours but the husband of another who is retired “wasn’t lucky enough to fall within that window, and he passed away”.

The campaign has become more overtly political since one of the local campaign groups, Healthcare Equality for the South East, saw its spokesperson co-opted onto Waterford City and County Council earlier this month – the first time the single-issue campaigners have entered electoral politics.

Matt Shanahan plans to spend the last few months of the council’s term as an Independent, hoping to build alliances with other councils in the southeast in support of better cardiac care in Waterford. A protest outside the Dáil in Dublin is also planned for March.

Shanahan admits he is “wrapped up” in the cardiac issue, having been hospitalised over a decade ago due to heart trouble.

“I can tell you now, when you’re in that situation, the lads are pulling out the paddles around you, you know you’re for the high jump. That is the loneliest place you’ll ever be.”

While his health has recovered, he said he is very conscious of the history of heart trouble in his family. His father, Dr John Shanahan, was one of three responsible for setting up the intensive care unit in UHW in the 1970s, but later died from a heart attack in the atrium of the hospital.

The same happened to Matt Shanahan’s great-grandfather, councillor Matt Walsh, who collapsed and died in the council chamber in 1927 during a heated argument with the county manager, after that year’s roads budget had been presented to elected members.

While Minister for Health Simon Harris has approved a second permanent cath lab that would operate five days a week for UHW, campaigners continue to hold out for a 24/7 cardiology service.

Speaking before Christmas, Mr Harris said almost all staff are now in place to expand the existing lab’s current operating hours to an 8am to 8pm weekday service.

The second lab would increase capacity for patients and address waiting times at the hospital, he said. A national review of cardiology services is due to be published later this year.

Campaigners remain concerned about people suffering heart trouble in the evening, thereby missing out on the region’s service.

In 2016, a report commissioned by the Department of Health found there was no need for a 24/7 cardiac service, but campaigners in Waterford have consistently criticised the figures used in this and other national reports ever since.

Cllr Shanahan claims there are a number of “discrepancies” in the figures surrounding the issue. One of these, he said, is travel times.

The European Society of Cardiology recommends that hospitals are able to deliver a 24/7 service for primary percutaneous coronary intervention (PPCI), a treatment for people requiring emergency intervention as a result of a heart attack.

It says that in order to have the best beneficial outcome from a PPCI and a better quality of life for patients, they should have the procedure within 60 minutes of presenting for a PPCI after a diagnosis.

For patients who are being transferred to present for a PPCI, the European guidelines say they have a maximum target time of 90 minutes from when the first emergency responder makes contact with a patient, but campaigners claim the vast majority of journeys to Cork take longer than this.

“If a 24/7 service was delivered in the southeast, there is a very good chance that treatment could be delivered within the time frame of the European standard for all patients in the region,” said Mr Shanahan.

The cost in terms of human life and health is unquantified but campaigners abound with stories of near misses and mercy dashes at later hours.

Earlier this month, two men in their 40s suffered cardiac events in Waterford on the same evening, according to Shanahan. The first was raced to hospital in Cork for treatment while the second had to wait for an ambulance to come from Youghal before he was taken to Cork.

“These cases paint a sorry picture of how equal health access is a myth in the southeast with respect to cardiac care,” he says.