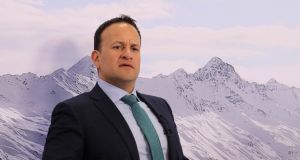 Taoiseach Leo Varadkar during an interview in Davos. “We should never forget that Brexit is a problem that was created by Britain.” Photograph: Francis MacGuire/Reuters

Footwear is important in Davos. You may be wearing a €1,000 suit but unless you want to end up on your backside on the snowy pavements you’d better bring your boots for walking outside. Leo Varadkar, now a Davos regular, knows this well, and carried around his boots in a SuperValu bag. He is going to require some nifty footwork in the weeks ahead.

The Swiss authorities used explosives to trigger controlled avalanches in the mountains around the Alpine resort last week. They were worried that a heavy dump of snow could result in snowslides when the global business and political elite came to town. The other great looming threat will not be so easy to manage.

Varadkar took part in a panel discussion on the future of Europe with Dutch prime minister Mark Rutte and his Polish counterpart Mateusz Morawiecki on Thursday. The British chancellor, Philip Hammond, was due to attend, but pulled out due to a congested diary (Varadkar later met him privately). In any event, the impending avalanche wasn’t mentioned once during the 45-minute event. Varadkar later told reporters that Brexit was the main topic of discussion in all his private meetings with European leaders. You can bet it was.

Nobody wants a no-deal even as the prospect looms ever larger, ever nearer. For British businesses, just as much as for rational continental politicians, it is unthinkable.

At Davos a reporter from the EU news website Politico was queuing for his coat after a British business lunch at the Belvedere Hotel. Adjacent in the queue, one senior British finance executive said to another UK executive: “I just saw [Liam] Fox and I lost the plot completely. I said ‘you’ve got to get out of your fact-free fantasy world. You know no-deal won’t work. We all know no-deal won’t work.’”

In Davos, Varadkar made a number of spirited interventions to point out the British responsibility – not to mention the commitments it has previously given and its obligations under the Belfast Agreement – to avoid a hard border in Ireland.

In fairness to him, Varadkar sounded resolute, rather than desperate. Later, blurting out warnings about the army going to the Border, he seemed genuinely exasperated. But the pressure is unmistakable. And it will intensify as the clock ticks down.

A no-deal Brexit at the end of March, Varadkar said, would trigger a “major dilemma”, which would require the Republic, the UK and EU to sit down. But his own special dilemma will be on the Taoiseach’s desk before then.

This was the week in which reality began to bite. The Revenue Commissioners warned of significant changes in the event of a no-deal Brexit which would bring additional costs for businesses and consumers.

The Central Bank warned of shortages of some foodstuffs (itself a contradiction to the soothing but sketchy reassurances offered by Varadkar and his Ministers in recent weeks) and an immediate economic hit which would cut growth by a whopping 4 per cent. Make no mistake: if this happens we are into emergency budget territory whatever Ministers say now.

European leaders kept up their mantra of support for Ireland. But the European Commission also did something else this week – remind everyone that there are certain realities to the UK becoming a third country. One of those is an external EU frontier however it ends up being managed.

The commission’s chief spokesman, Margaritis Schinas, faced a question he has been asked a 1,000 times, in a 1,000 different ways. Instead of giving the answer that he always gives (“The British government has committed to no hard border; the withdrawal agreement and the backstop are the way to avoid it; etc”), Schinas instead said: “If you’d like . . . to push me and speculate on what might happen in a no-deal scenario in Ireland, I think it’s pretty obvious – you will have a hard border.”

Dublin was immediately flummoxed, and scrambled to pooh-pooh the notion. The commission isn’t pressuring us, Dublin said.

Other sources suggested that Schinas simply misspoke – even though this is not a habit that chief spokesmen for anyone tend to cultivate. Nor was there any correcting statement from the commission that day.

The following day Schinas, inevitably, was asked about his comments. He made a long statement in support of Ireland which Government Buildings circulated eagerly, spinning that he had reversed his position. He did nothing of the sort.

The commission, Schinas said, was “determined to do all it can, deal or no deal, to avoid the need for a border”.

He said that “Ireland and the EU also have responsibilities as regards the protection of the single market and the customs union.”

He did not rule out a hard border; instead he said the commission would seek to avoid the need for such a border.

Irish Ministers took to using the phrase “no physical infrastructure at the Border”, rather than “no border”.

In some quarters the development was seized upon as the EU finally turning on Ireland – as had been gleefully predicted in British quarters for a long time – and squeezing.

But that is not what it was at all. Instead, according to people active in these matters at a high level in Dublin and in Brussels, the commission was reminding Ireland that there would be consequences to its choices.

The solidarity and support extended to Ireland by the European institutions and EU member states has been comprehensive, sustained and meaningful. It shows no sign of abating. But the commission was reminding Ireland that it could not ignore EU rules (and World Trade Organisation rules, for that matter) in perpetuity. And that, inevitably, will become a factor in Irish decision-making over the coming weeks.

The focus was in Brussels and Dublin this week. Next week it will shift back to Westminster, where MPs will cast a series of votes. One will propose legislation which mandates the British government to avoid a no-deal exit in all circumstances; another suggests the ratification of the existing deal with a time limit on the backstop. That has been clearly ruled out by both the EU and the Irish Government.

Yet some sources in Brussels and Dublin are less quick to dismiss the idea of a protocol or codicil added to the withdrawal agreement which specifies a process to review or revise the backstop at some point in the future. There is already a review in the agreement, in article 20 of the protocol, which could – if the will was there – be strengthened.

This would be a compromise by Ireland and the EU – and something of a retreat by Varadkar. But it would give May something to get her deal over the line. And she needs something or the deal is dead.

The backstop was the manifestation of a political and diplomatic success by the Government in placing Ireland’s concerns at the heart of the EU. But it is a device, not a principle, as Varadkar has himself observed.

Now the Taoiseach may have to decide if he should compromise on the backstop, thus enabling May to trumpet the concession to her own Brexiteers and, crucially, to the DUP and so convince them to back her deal with the EU. Then everyone could stand down, and the Brexit crisis will abate for the years it takes to negotiate the future trading relationship. And who knows what sort of British government will be in place then?

Whatever road the Government takes, as long as Britain wants to leave the EU it will mean Ireland faces tough choices. Events this week were evidence enough of that.