Varadkar and May urged to implement Irish language act in North

Coalition of sports people, academics, arts and music figures call for commitment to be honoured 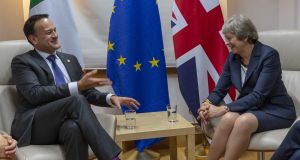 More than 200 people from the political, academic, legal, arts and sporting worlds have called on Taoiseach Leo Varadkar and British prime minister Theresa May to implement an Irish language act in Northern Ireland.

More than 200 people from the political, academic, legal, arts and sporting worlds have called on Taoiseach Leo Varadkar and British prime minister Theresa May to implement an Irish language act in Northern Ireland.

The letter comes at a time when nationalist demands for movement on the language are one of the key issues in the current political talks aimed at restoring powersharing at Stormont.

Their letter, published in the Irish News, urges the “prime minister and An Taoiseach to fully implement without further delay the commitments made in the St Andrews Agreement of 2006 in relation to an Irish language Act”.

“Without formal legal protection, despite the promises made over many years, the Irish language community are still denied language rights that are afforded to indigenous language communities across these islands. We are the anomaly,” it says.

The political signatories include Gerry Adams and Michelle O’Neill of Sinn Féin; Colum Eastwood and Patsy McGlone of the SDLP; Northern Green Party leader Claire Bailey and Gerry Carroll of People Before Profit.

“To those who fear that learning the language will somehow change people’s political viewpoint I would state that it has given me a renewed pride in my Presbyterian heritage and made me more aware of the links between Ulster and Scotland,” said Ms Ervine, a sister-in-law of the late Progressive Unionist Party leader David Ervine.

“I have lost nothing of myself through learning Irish but have gained so much. I want to see the Irish language afforded similar status to Scotland and Wales, in keeping with long-standing European-wide protections for minority languages.”

A number of academics signed the letter including Prof Colin Harvey, professor of human rights law at Queen’s University Belfast. “There is a rights and equality crisis in this society...Transformative change is required now. This comprehensive agenda for progressive change must embrace the promised Irish language act. People have waited long enough,” he said.