Vaccine should not be given to people close to death, says HSE 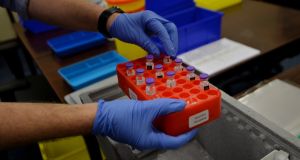 The decision on whether or not to vaccinate a very elderly person should be made in consultation with patients, their families and with GPs or nursing staff, HSE chief clinical officer, Dr Colm Henry, said. File photograph: Alan Betson

Doctors have been advised to weigh up the benefits of giving the Covid-19 vaccine to people who are very frail or approaching the end of their lives.

Dr Henry stated the vaccine should not be administered to people who are unlikely to live long enough to enjoy the benefits of immunisation.

“It is not appropriate to vaccinate people if their expected duration of life is less than that for the vaccine to take effect and if, in that context, their overall care is focused on comfort and dignity,” he stated.

The letter was issued on Sunday in response to reports from Norwegian health authorities on adverse reactions to Pfizer/BioNTech vaccine. On Sunday, Norway raised an estimate of the number of elderly people who died after receiving the jab from 23 to 29.

Norway has given at least one dose to about 42,000 people and focused on those considered most at risk if they contract the virus, including the elderly.

Dr Henry said the decision on whether or not to vaccinate a very elderly person who may not have long to live should be made in consultation with patients, their families and with general practitioners or nursing staff of long-term residential care facilities.

Residential care facility staff should be aware of expected side effects following administration of a vaccine and should be familiar with the processes following vaccination.

Specifically, they should know who to contact if a resident becomes unwell following vaccination and the reporting process for any adverse events.

Where the vaccination is deferred or declined on the basis of this process, a note should be made in the person’s healthcare record.

Dr Henry further advised that vaccines should not be given to people with acute febrile illness (acute fever) and to anybody within four weeks of being diagnosed with Covid-19.

Dr Henry added that the side effects of vaccines had to be seen in the context of the overall benefits for the general population.

He stressed that some people who receive vaccinations will die in the natural course of events.

In relation to the 23 deaths initially recorded among elderly people in Norway who received the Pfizer/BioNTech vaccine, of whom 13 have been assessed, he acknowledged that common adverse reactions to mRNA vaccines, such as fever and nausea, may have contributed to the deaths of very frail elderly individuals.

However, the National Immunisation Advisory Committee has recommended that the vaccination programme continue as planned.