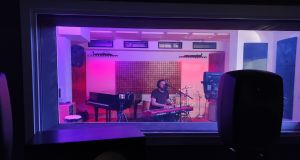 Generations of musical talent from Seán Ó Riada to Mícheál Ó Súilleabháin have learned their craft at University College Cork (UCC) and now future musicians will benefit as the music department has been awarded its largest ever gift.

The estate of British master builder Sidney V Regan has bequeathed €2 million to the department, helping to equip the university’s new sound studio which will be officially opened on Tuesday.

Prof John O’Halloran, interim president of UCC, welcomed the donation and said the university was hugely grateful to the estate of Mr Regan for the bequest to further support music at UCC.

He said the late Mr Regan’s generous support would enable the music department to build on the great tradition of people such as Ó Riada, Aloys Fleischmann and others who have studied and taught at the department.

He recalled Mr Regan moved to Cork in the 1960s and he and his wife, Hilda, became very involved in the local music scene, with Mr Regan joining the Commodore Male Voice Choir and founding the Cobh Gramophone Society.

It was during this time the Regans befriended Fleischmann, former professor of the music department at UCC. Upon his death, Mr Regan bequeathed almost all of his €2 million estate to his friend’s beloved department.

Dr Jeffrey Weeter, head of music, also thanked Mr Regan’s estate and said it would enable the music department to provide direct support to students in the form of scholarships for both undergraduates and postgraduates.

“Sidney V Regan’s bequest is the single largest gift to the music department in its 113-year storied history and this act of unmatched generosity will enrich the lives of current and future students immeasurably,” he said.

“It will also improve physical resourcing for performers, composers and the academic study of music and further enable the department to bring in outside expertise, such as professional performers, to support its activities.”

Dr Weeter said UCC would formally welcome the bequest at the official online unveiling of the department of music’s new sound studio, which takes place on Tuesday at 4pm.

He said the new sound studio, which consists of a fully-equipped live room, vocal booth and control room, has been named in celebration of the renowned American composer, Pauline Oliveros, who died in 2016.

Ms Oliveros had a close working relationship with staff at the UCC music department and was a guest of honour at the university’s Quiet Music Festival in 2008. In 2014, she was awarded an honorary doctorate by UCC.

Dr Weeter said music technology is an essential part of being a modern musician and the new facility opens the doors to diverse areas of study not previously available at UCC.

“In keeping with the spirit of its namesake, the Pauline Oliveros sound studio has been designed as a space for learning, creativity and experimentation. It is an exciting development in a department already rich with possibilities.

“The new sound studio constitutes one of the most significant additions to the university’s music resources in many years and is a very exciting development for current and future students alike.

“Developed independently of the Sidney V Regan bequest, the Pauline Oliveros sound studio will now benefit from some new equipment facilitated by the generosity of the late Mr Regan’s estate,” he said.