Up to 2,000 rapid test kits will be required a week to test lorry drivers on direct ferries 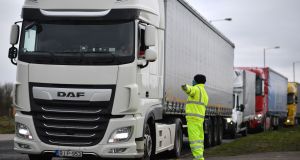 The French government is expected to introduce a mandatory Covid-19 requirement for all hauliers carrying goods on direct ferry routes to produce a negative test result on their arrival. Photograph: Ben Stansall/AFP

The Department of Transport is preparing contingency plans to carry out Covid-19 tests on lorry drivers heading to France on direct ferries in anticipation of new French health checks.

The French government is expected to introduce a mandatory Covid-19 requirement for all hauliers carrying goods on direct ferry routes to produce a negative test result on their arrival.

The department is planning to set up Covid-19 testing centres for hauliers near Dublin and Rosslare ports to carry out tests on drivers but outside the ports to avoid congestion building up.

France is planning to take more stringent measures, expected over the coming days, to prevent the spread of the more infectious UK coronavirus strain from Ireland.

This will require hauliers to take a rapid antigen test – rather than the longer PCR test normally used to detect the virus – ahead of travelling to France on the direct ferries.

Asked if the new testing requirement would cause chaos, Minister for Transport Eamon Ryan told RTÉ’s This Week radio programme on Sunday: “We will have to manage that and make sure that we can do that in a way that doesn’t restrict or interrupt supply chains.”

“That is demanding but I am confident we will be able to do it,” he added.

The department is working with Transport Infrastructure Ireland, the State agency that manages the road network, to find locations on motorways to set up testing sites.

The HSE will be providing the antigen tests to meet the French government’s requirements, but testing will be carried out by an outside contractor hired through a procurement process.

The new tests for lorry and heavy goods vehicle (HGV) drivers will not affect the HSE’s testing capacity because the requirement is for the quicker antigen test whereas the HSE uses PCR tests in its testing programme.

It is expected that between 1,500 and 2,000 tests a week will be required for lorry drivers, with the State funding the purchase of these antigen test kits.

Government officials are not fully certain that the French will proceed with the test requirement but are proceeding with plans due to concerns about delays on direct ferries.

These sea routes to France have become critical for Irish supply chains since Brexit came into effect at the end of last year causing delays and disrupt supplies on UK “landbridge” with continental Europe due to the volume of post-Brexit border checks required on Irish Sea trade.

“It is absolutely critical that we keep that route going,” said one Government official.

“We will do what it takes to keep that going.”