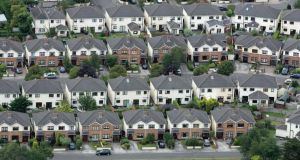 Plans for at least four new ‘urban villages’ will be devised under the new Dublin City Development Plan 2022-2228 to help house an expected increase in population of up to 70,000.

The days of the three-bed semi-detached house “are over” in Dublin, the city council’s most senior planner has said, as work gets under way on plans for new high-density neighbourhoods across the capital.

Plans for at least four new “urban villages” will be devised under the new Dublin City Development Plan 2022-2028 to help house an expected increase in population of up to 70,000.

Dublin city planner John O’Hara said most homes in the new neighbourhoods would be apartments. “The days of the three-bed semi are over,” he said.

The city needed to maximise the potential of land within the M50 to deliver some 30,000 additional homes over the period of the plan, Mr O’Hara said. This would involve building on infill sites, but would also require the development of strategies for large industrial estates including the Dublin Industrial Estate near Glasnevin cemetery; Jamestown Business Park in Finglas; the Malahide Road Industrial Park in Coolock; and, to the southwest of the city, industrial lands around Kylemore Road, Park West Road and the Inchicore railway.

The plan would also guide the development of the Glass Bottle Company site in Poolbeg, and other large land banks at the Naas Road, Ballymun and Cherry Orchard.

While there had during the recession been a push back to building two-storey housing, Mr O’Hara said, the urgency of dealing with climate change meant that was no longer sustainable.

“The corollary of that is to contain urban sprawl with higher-density development,” he said. “That does not mean forcing employment out of industrial areas. Our policy, right through the development plan, is for mixed use, based on the 15-minute neighbourhood principle, where your work, and everything you need for quality of life, is within a 15-minute walk or cycle.”

Major changes are also expected for the city centre, Mr O’Hara said. “Cars will not be used as a means of commuting – that will be a major priority.”

While the council does not plan to ban cars, measures will be taken to ensure cycling, walking and public transport are the more attractive commuting options, he said.

Retail will no longer hold the same place in the post-pandemic city, he added.

“We need to consider what is the future of the city post-Covid. Retail, although there will be some bounce back, will never return to the position it had. But we have to retain the vitality of the city streets, and that might mean a greater focus on culture, on eating out, and on more residential use in the city centre.”

The development plan would also consider whether there was an “overprovision” of hotels and student accommodation in certain parts of the city, he said.

“We have to look at the loss of cultural capital and where we can provide those spaces indoors or outdoors. We also need to consider whether the hospitality industry might have a contribution to make to that cultural offering, maybe allocating part of a hotel to a jazz club.”

The council is holding online public information meetings on the development plan on January 25th and 26th. A “strategic issues paper” is available at dublincitydevelopmentplan.ieand the closing date for submissions is February 22nd.