UVF held talks with IRA to discuss a federal Ireland 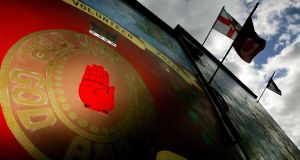 The UVF indicated to exclude the UDA due to a state of confusion within the organisation. Photograph: Jeff J Mitchell/Reuters

The UVF held secret talks with the IRA Army Council in 1988 to discuss the prospect of a federal Ireland, state papers have claimed.

According to the document, marked “Secret” which was released under the 30-year rule, the meetings were facilitated by Father John Murphy, a chaplain in the Maze Prison.

The memo, written to the Taoiseach’s Office in November 1988, said that Fr Murphy was anxious to keep the meetings secret and listed the three main enemies of the talks as “the NIO (Northern Ireland Office), the RUC and the DUP”.

“Fr Murphy was frankly surprised at the speed with which events had moved and was particularly surprised at the signs of apparent flexibility being shown by the UVF in this exercise where they demonstrated a willingness to at least talk about a wide range of possible future arrangements for Ireland, not excluding concepts like a federal Ireland,” Brendan Mahon, of the Anglo Irish Division wrote.

Mr Mahon adds that Fr Murphy’s understanding of the concept of a federal Ireland was “based on the four provinces including a nine-county Ulster with a separate province-type arrangement for Dublin similar to the District of Columbia in the US”.

Federalism is a process by which a central and regional government share power over the same geographical which indicates Dublin would have a say in a Stormont Government.

The papers did not specify whether the UK would have a continued role in Northern Ireland.

“John Murphy has now informed me on a highly-confidential basis that these talks have now moved outside of the confines of the prison and that the Army Council of the IRA and the leadership of UVF have now agreed to separate talks with the chaplains outside of the prison,” Mr Mahon wrote.

The papers go on to state that neither the UDA nor the INLA were involved in the talks, which were indicated to have started in the summer of 1988.

The UVF indicated to exclude the UDA due to a state of confusion within the organisation and “to their fears regarding the level of security force penetration of the UDA”.

However, it was indicated that former Unionist leader James Molyneux knew about the talks and Fr Murphy “did not expect any trouble” from the UUP representative.

Mr Mahon indicated he felt Mr Molyneux had given the “OK” regarding the initiative.

Around the same time as the memo was written, November 1988, it was noted in the media that protests organised by unionists against the Anglo-Irish Agreement were less well supported than previous years.

Fr Murphy also claimed that the flexibility being shown by the UVF was “indicative of the general uncertainty among loyalists as regards their future in a changed Anglo/Irish relationship”.

The religious hierarchy were also kept in the dark, the memo reads that the bishops were not aware the talks had moved outside the prison, and that knowledge was confined to “the leadership of the IRA and UVF, two chaplains and now, ourselves”.

The support of the bishops was apparently being held off, until their backing was needed “to forestall any attempt by other political interests to derail the initiatives”.

Fr Murphy seemed to Mr Mahon “optimistic” about the prospects.

“It is nonetheless an extremely interesting development entailing, as it does the military leadership of the IRA (as distinct from Adams etc) in talks with the most hardline loyalist paramilitary organisation.” - PA