Hillery was pressurised to make State visit to the Vatican 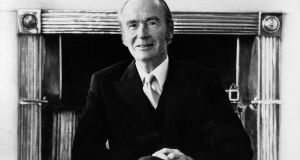 President Patrick Hillery came under pressure in 1988 to carry out a State visit to the Vatican in order to facilitate a second visit by Pope John Paul II to Ireland.

Many of the requests were “remarkably similar” in nature, according to Thelma Doran, the chief of protocol in the Department of the Taoiseach, suggesting there was an orchestrated campaign to facilitate a reciprocal visit.

In a memo that has been released along with other State papers from 1988, Doran said many colleagues in the Oireachtas of then minister for foreign affairs Brian Lenihan had received representations in relation to a second visit.

One of them, the Wexford Fianna Fáil TD John Browne, wrote to the president on behalf of a constituent: “Mr Murphy pointed out that as president [you have] not officially visited the Vatican since taking up office and he is anxious that you would do the same and also invite the pope to Ireland at some stage in the near future.”

Another letter from a peace commissioner named John Nolan said: “It is important to most Irish people that any unnecessary obstacles to another papal visit to Ireland be removed and more particularly, by a statesman such as your good self. It would be sadly unrepresentative of your esteemed presidency of Ireland, were you to be remembered as the president who by an oversight, prevented Pope John Paul II from revisiting Ireland.”

Lenihan wrote back to Denis Lyons, a junior minister at the time, stating that it would primarily be for the “ecclesiastical authorities in Ireland and in Rome to consider whether and if so when His Holiness might consider making another visit to the country”.

However, a proposal that Hillery would combine a State visit to the Vatican with his attendance at the beatification of Fr Charles of Mount Argus was ruled out. The department of foreign affairs said it would not be in favour such an approach. It stated that although Fr Charles had been a long time at his residence in Mount Argus, he was Dutch, not Irish.

The department added that it would be usual for a head of State to attend a beatification and it would look odd if the Irish head of State turned up and the Dutch one did not. It did not anticipate such a high level representation from the Netherlands.

Taoiseach Charles Haughey agreed with this approach and said planning should go forward for a State visit that would not include attendance at the beatification.

President Hillery did make a State visit to the Vatican in April 1989, but it was not followed by a second visit to Ireland by Pope John Paul II.

Pope Francis’s visit to Ireland this year was the first since Pope John Paul II’s visit in 1979.