Charlie Haughey: A 'dreadful person’ but a ‘good politician’ 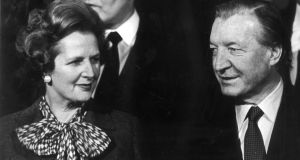 British prime minister Margaret Thatcher and taoiseach Charles Haughey: “How Margaret and the others do not see through him is beyond me,” Tory MP Ivor Stanbrook is reported as saying. Photograph: Colman Doyle

Charles Haughey was a “dreadful person” who “seized every opportunity to get under the Border”, an influential Tory backbencher fumed at an Irish diplomat as they shared a train journey home from a funeral.

Files just released into the National Archives recount the incident in September 1988, as Richard Ryan of the Irish Embassy in London writes back to Dublin about coming under a barrage of “neck-reddening” invective from MP Ivor Stanbrook.

Stanbrook, then a leading member of Westminster’s Northern Ireland Committee and his own party’s backbench committee on Northern Ireland, had been at the funeral of fellow Conservative John Biggs Davison.

When he boarded the train back to London, he was invited to join Ryan and another Tory MP, Sir Antony Buck, who had also travelled to pay their respects, Ryan conveying a message of sympathy from Haughey.

“Stanbrook said he would join us for the journey but that (and this directly to me) he had no interest in any exchanges with me,” Ryan reported in a document marked “confidential” and stamped “seen by the Taoiseach”.

“Stanbrook said he had no intention of fraternising (sic) with the representative of a State that has no business whatever in the affairs of Northern Ireland.

“Furthermore, he said he is well aware that I ‘go around’ parliament representing myself as reasonable and trying to be helpful and positive about Northern Ireland.

“All I have done, though, is to ‘subvert the position and the honour’ of his ‘friends and colleagues, the members for Northern Ireland’.”

The diplomat said he tried to reason with an increasingly irate Stanbrook, suggesting they had robust exchanges in the past and should be “pragmatic and meet one day for a meal”. But it was to no avail.

“There was more in the same vein at a personal level,” he said of the tirade unleashed on him.

“Buck was outraged and said so. Stanbrook accused him of being like the ‘three hundred-odd’ other Tory members who ‘don’t give tuppence for the union’ and who sold out ‘to this fellow and Haughey’.

“Stanbrook was a fair burgundy colour about the neck at this stage.”

The diplomat tried to get across Dublin’s view on Anglo-Irish relations at the time, but Stanbrook continued with his “spiteful interjections”.

“Stanbrook said there has been a ‘transparent consistency’ about the taoiseach’s intentions over the years: he has always ‘seized’ every opportunity to get under the Border.

“He is a ‘dreadful person – mind you, a good politician and I don’t blame him for that. How Margaret [Thatcher] and the others do not see through him is beyond me.’”

Stanbrook then claimed that a fresh vote in the House of Commons would see the Anglo-Irish Agreement “thrown onto the rubbish heap”.

But Ryan argued the “avalanche of reaction” he predicted was “a fiction”.

Buck, an MP for Colchester and a moderniser within the Tories, “agreed strongly” with Ryan, incurring even further opprobrium from his party colleague.

“‘There you are, you see,’ said Stanbrook, launching into another neck-reddening diatribe about the uselessness of the agreement, the hypocrisy of the parliamentary party, and Mrs Thatcher’s inability to ‘confess her failure and tear it up’.”

It will be apparent that much of the discussion was unedifying

Stanbrook blamed Thatcher’s officials and the foreign office, “who tell her about ‘all the terrible things that would happen to the American relationship if she were to treat Eire as she richly deserved’.”

The diplomat said he did not allow himself a “warm response” to the prolonged broadside but instead stayed on as “steady and firm a tack as possible”.

“Buck later said that this actually fuelled the flame of Stanbrook’s bad temper,” he wrote.

“It will be apparent that much of the discussion was unedifying, and the foregoing is only an illustrative summary of it.

“Stanbrook is, I believe, quite irredeemable and is, finally, a rather pathetic figure.”