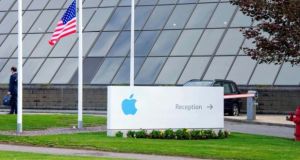 Ray MacSharry objected to additional support being given to Apple in Cork when he was minister for finance in 1988, describing the company’s record in Ireland as “very disappointing”.

He objected to any further State aid to Apple 30 years ago having stated that the company was already hugely profitable in Ireland with cumulative profits of £125 million (€159 million) over the previous three years.

The Industrial Development Authority (IDA) proposed to grant aid an expansion of the Cork facility with a State investment of £661,500, 35 per cent of a proposed £1.9 million investment in a European repair centre. The IDA also proposed writing off the sale of 3.8 acres of land at Hollyhill to Apple Computer Limited at a cost of £59,400.

The IDA did so on the basis that the gross cost per job would be £12,015 and the exchequer would recoup the costs within three years, according to State papers released for 1988.

The IDA acknowledged that Apple was profitable in its Cork operation but it was necessary to support the facility “because of mounting pressure on Apple to open additional manufacturing plants in Europe”.

MacSharry was not persuaded by the IDA arguments. In typically blunt fashion, he described the proposed support as “not warranted”.

He said Apple’s job targets had not been “remotely approached”, research and development facilities had not been located in Ireland and the skill levels of the workplace were “not particularly high”.

He added: “The parent company has shown a lack of commitment to its Irish operation by opening a facility in Singapore [in 1981] which had a direct effect on performance in Cork.

“Such freedom of action has been facilitated by the lack of full performance clauses or job-related clawback clauses and parent company.”

He concluded that Apple had “enormous resources available to implement an expansion which will be to their own benefit with the need for further exchequer support”.

MacSharry’s views were not supported by the minister for industry and commerce Albert Reynolds who said the proposed grant aid was only half that of previous grant proposals. He did not accept the notion that Apple’s performance in Ireland had been disappointing. “Due to changes in the market for the company’s product, Apple was unable for commercial reasons to deliver the original project as planned,” Reynolds wrote.

He echoed the warnings by the IDA that if Irish government support was not forthcoming, there would be a “serious danger of the expansion being located outside Ireland”.

Apple set up in Cork in 1980 and at that stage employed 307 people, including 100 part-time workers. The Hollyhill facility is now Apple’s headquarters in Europe, employing 6,000 people.

Recent investigations into Apple’s operations have established the company enjoyed almost tax-free status in Ireland during the first 10 years in the State.

The accounts for Apple’s main Irish unit, then known as Apple Computer Ltd, for 1989, the earliest year for which detailed accounts were filed, showed the subsidiary paid $500,000 in income tax on profits of $317 million, a rate of 0.2 per cent.

In 2016, the European Commission ruled that Apple had been the recipient of €13 billion in illegal state aid and ordered that the money be paid back to the Irish State.

The Government has appealed the decision and the funds are currently in an escrow account pending the outcome of the European court appeals process.

1 Direct sea routes to Europe offer certainty in choppy Brexit waters
2 ‘I don’t need to do any of this. . .I don’t actually need to work.’
3 Only way is up for Stripe as valuation skyrockets
4 AIB revives €1bn-plus problem mortgages sale
5 Promontoria barred from pursuing doctor over Ulster Bank loan
Real news has value SUBSCRIBE