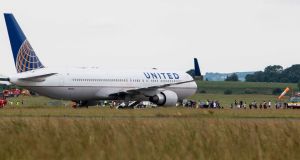 Passengers disembark from the United Airlines transatlantic flight which was diverted to Shannon Airport after a security alert. Photograph Press 22

A transatlantic flight was diverted to Shannon Airport on Monday after a message was discovered in a toilet claiming there was a bomb on board.

United Airlines flight UA-971 was travelling from Rome’s Fiumicino airport to Chicago at the time. There were 214 passengers a crew on board.

The crew declared a May Day at around 12.45pm and informed air traffic controllers that they wished to divert to Shannon Airport.

The Boeing 767-300 jet turned around about 200 kilometres west of Co Clare and then flew a pattern over the ocean to dump fuel to reduce its weight before commencing an approach to Shannon.

It is understood that the alarm was raised when a message was discovered scribbled on a surface in one of the jet’s toilets.

Investigating gardaí began the lengthy process of taking handwriting samples from each of the passengers in an effort to establish whether one of them had written the message. All the passengers’ hand baggage was also removed for security screening while luggage in the cargo hold was also expected to be examined.

Ahead of the landing, authorities at Shannon implemented emergency procedures which involved alerting the local authority fire service, HSE National Ambulance Service and An Garda Síochána.

A number of ambulances and garda patrols responded to the airport along with members of the armed Garda Regional Support Unit (RSU).

The flight landed safely at 1.42pm and was met by airport rescue vehicles. The aircraft continued to a remote taxiway where it was then met by airport police and gardaí­ while fire crews also surrounded the jet.

About 40 minutes after landing passengers were disembarked normally using mobile steps. They were the escorted on foot a short distance to waiting buses and taken in groups to a screening area within the airport.

An airline spokesperson said: “United flight UA971 en route to Chicago from Rome, diverted to Shannon following a potential security concern. Additional security screenings will be performed on all customers and baggage, and we will work to get customers on their way to Chicago as quickly as possible.”

The airline later said passengers had been sent to local hotels for the night. The aircraft is scheduled to depart on Tuesday at 3pm.